The emerald ash borer (EAB), Agrilus planipennis, is an exotic insect pest from Asia. The flattened, creamy white larval stage feeds below the bark and cuts off the living, water and nutrient conducting vessels causing tree death. Adults are small elongated oval beetles that are metallic green in color. This insect colonizes the top of ash trees (Fraxinus species) first, then moves down the tree.

As of February 2014, all 99 counties in Iowa were quarantined by the Iowa Department of Agriculture and Land Stewardship to slow the movement of this destructive pest to non-quarantined areas. EAB has been found in several Iowa counties, as well as in the neighboring states of Illinois, Kansas, Minnesota, Missouri, Nebraska, South Dakota, and Wisconsin. 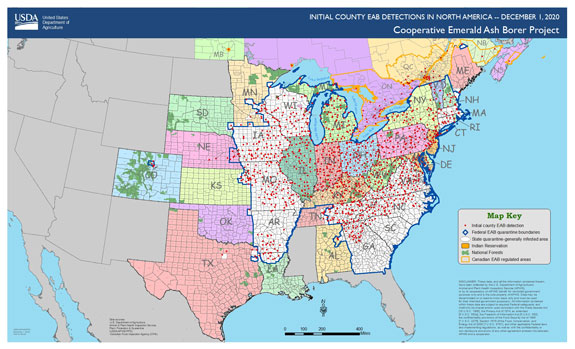 Iowa State University Extension and Outreach experts encourage Iowa homeowners to evaluate their ash tree’s health and value in the landscape, and their commitment to years of preventive treatments. If an ash tree is within 15 miles of a known EAB infestation, preventive treatments are suggested for individual trees. The current suggested treatment areas in Iowa is provided in the map below. Check out all of the information (including some in Spanish) about this pest that threatens Iowa’s forests. 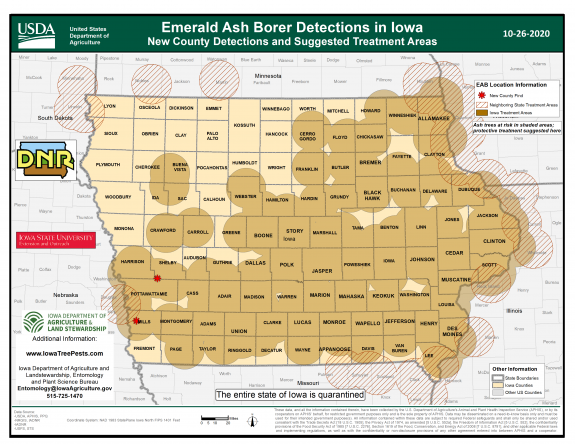 Potential Side Effects of EAB Insecticides