ONAWA, Iowa – Giving more youth the chance to learn about livestock and take animals to the fair is the goal behind a project started a decade ago in Monona County.

Known today as “The Breakfast Club,” the project allows youth to keep pigs and broilers at Iowa State University’s Western Research and Demonstration Farm. The pigs are owned by the university, but youth get the full experience of taking care of them and showing them at the fair.

And “taking care” of the animals is a big part of what’s involved. 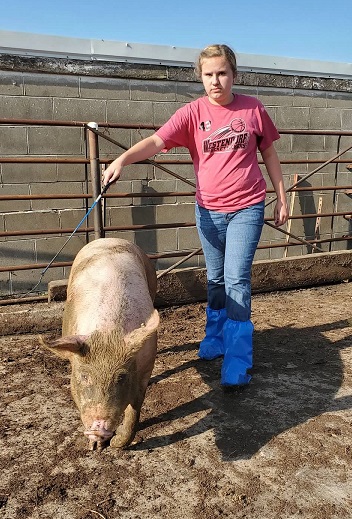 “Our program is very stringent, with high expectations for the youth,” said Melissa Beermann, director for Iowa State University Extension and Outreach in Monona County. “There is a schedule of what they must do every year and it includes signing up for chore rotations and attending educational events.”

Youth sort and weigh pigs, sign up for chores, monitor animal welfare, practice showmanship skills and work as a team with employees of the research farm, county swine superintendents and extension.

Participants are expected to exhibit up to three pigs at the Monona County Fair in July and are expected to follow herdsmanship guidelines, the 4-H Code of Ethics and participate in fundraising for the project.

The exhibitors pay $30 each to take pigs, which goes toward the expenses incurred by the research farm. The broilers are paid for through donations – parents and the public can buy a broiler for $20, and for each purchase, a second broiler is donated to a local foodbank. Last year, 56 whole processed chickens were donated to the Onawa Food4U nonprofit.

The project started in 2010, when local fair and extension officials saw the number of swine projects dwindle down to one. Part of the problem, according to Beermann, was that families lacked a place to keep pigs and were losing knowledge of the project.

A partnership was formed to keep pigs at a farm owned by one of the swine superintendents. As numbers grew, the project was re-located to the Western Research and Demonstration Farm. This year, organizers are expecting a record number of hogs will be taken to the fair – about 115 total, and about 60 broilers.

As the project grows, it continues to educate youth about animal agriculture and what’s involved with taking care of livestock.

“It opens your eyes because not everyone has the opportunity to be around pigs and this just gives all of the participants an opportunity to learn,” said Delaney Hart, a senior at Maple Valley-Anthon Oto Community Schools.

Hart is in her ninth year of showing and was with the program when it began in 2011. She said the project can seem a bit intimidating at first, but by working together, the older exhibitors are able to teach the younger exhibitors, and everyone learns from each other.

This year’s Monona County Fair will be held July 13-18.

New in 2020, organizers received an Extension Agriculture and Natural Resources grant aimed at improving diversity. Through a two-year, $10,000 grant, a partnership was formed with Science Bound – Iowa State’s pre-college through college program that empowers Iowa students of color to pursue degrees and careers in ASTEM (agriculture, science, technology, engineering and mathematics) and education.

“It was so exciting to see them be so successful,” Velasquez said. “Each obtained their Youth Quality Care of Animals certification and learned about livestock showmanship, cuts of meat, ethics, biosecurity, breeds, proper feed rations and rate-of-gain.” 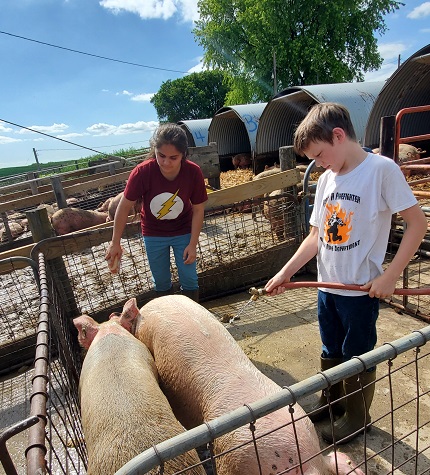 Jocelyn Ramos, a junior at Denison High School and a Science Bound Scholar, said participating in the pig project last year helped her complete the required summer enrichment hours, while exposing her to something totally new.

“I was able to find my passion by showing pigs,” she said. “I never would have imagined myself doing this, but it really opened my eyes to what’s available.”

Ramos lives in town, and credits the pig project for introducing her to careers in agriculture and the possibility of studying agriculture at Iowa State. She was one of four Science Bound members who showed pigs in 2020 and was awarded “newcomer of the year” for her efforts.

Although 2020 was a difficult year, due to the COVID pandemic, there were still 26 youth who participated. Educational sessions were made available online, and a shortened version of the county fair was still held.

This year, organizers and exhibitors are hoping for a return to normal, as they anticipate a record number of pigs and participants.

“It’s a pretty unique project,” said Chris Beedle, who manages the research farm. “For those who have been in the farming industry, it’s rewarding to see children and parents who are removed from agriculture, become reacquainted.”

The research farm retains ownership of the pigs, which are marketed to Niman Ranch, a niche market supplier of meat. Farmers from Niman help offer educational sessions throughout the year.

According to Beermann and Beedle, it’s common to see exhibitors come full circle with their knowledge of livestock and agriculture.

“How much these young people grow in a couple months is probably the most pleasing part to me,” Beermann said. “I am in awe over them.” 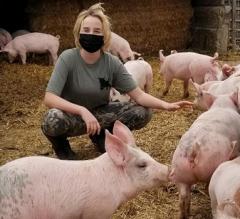 Youth who have been with the program a few years have also become some of its greatest advocates – going into schools across Monona and Crawford counties to tell other youth about why they should get involved.

Troy will be showing alongside his sister, Dena, who is 18. This is her fifth year in 4-H but her first to take pigs.

Although this year’s deadline for showing pigs has passed, there may still be time to sign up for poultry projects.

(Top right) Joanna Koenig working with pig project.
(Middle) Marlin Garcia-Sandoval and Blazen Beermann washing a couple pigs.
(Bottom) Miah Hillman with a group of pigs she is helping to care for.