Yard and Garden: When Sawfly Larvae Visit the Garden

AMES, Iowa – Horticulturists with Iowa State University tell us that several common sawflies found in Iowa are bothersome to gardeners: the azalea sawfly whose larvae feed on the leaves of azalea, the rose slug on roses, the scarlet oak sawfly that feeds on oak and the European pine sawfly. Sawfly larvae look like caterpillars and feed on leaves like caterpillars, but sawflies are wasps. This week the horticulturists identify the various sawfly larvae that gardeners are finding on their plants and trees.

Small, green worms are eating the foliage on my roses. What should I do? 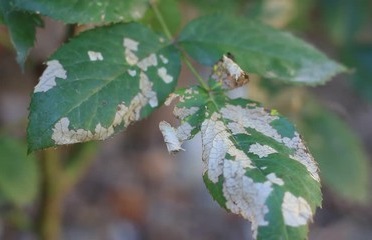 The small, green worms are probably the larvae of the rose sawfly. Rose sawfly larvae, commonly referred to as rose slugs, have tapered bodies, are up to 0.5 inch in length and pale green in color. The larvae somewhat resemble slugs, hence the common name of rose slug. The rose slug has one generation per year, the larvae typically appearing in May.

Rose sawfly larvae usually feed on the undersides of rose leaves. They consume most of the green tissue of the leaf, leaving behind a thin layer of tissue and the veins. The thin layer of tissue that remains eventually turns light brown. Foliage damaged by rose slugs has a windowpane or skeletonized appearance.

Rose slugs can be controlled with garden insecticides. Apply insecticides when the larvae are small and the damage is minimal. Controlling larvae after damage has become widespread is of little benefit. Fortunately, rose slugs do not kill roses. The damage is mainly cosmetic. Damaged plants will recover.

Worms are devouring the needles on my mugo pine. What should I do?

The worms that are eating the needles on your mugo pine are the larvae of the European pine sawfly. European pine sawfly larvae are grayish green. Two light stripes and one dark stripe run down the sides of the body. The legs and head are shiny black. The larvae feed mainly on mugo, Scotch and Austrian pines, though other pine species are occasionally damaged. They do not feed on spruce or fir. Larvae typically appear in mid-May in Iowa and are usually gone within a few weeks. Sawfly adults are small, wasp-like insects.

European pine sawfly larvae feed on needles produced in previous years. The needles on most pines persist for two to five years. They do not harm the new needles developing on the branches. As a result, the damage is mainly aesthetic. Larval feeding does not destroy the affected branches. The branches simply have fewer needles than normal.

To keep damage to a minimum, the larvae of the European pine sawfly can be controlled by knocking/shaking them off infested branches into a bucket or other container and destroying them, pruning off and discarding infested branches, or spraying them with an insecticide, such as Sevin.

Little green worms are eating the leaves on my azalea. What are they and how do I control them?

Control measures are warranted when large numbers of larvae are present. Apply insecticides, such as Sevin or spinosad, when the larvae are small and the damage is minimal.