Yard and Garden: When Potatoes Have Skin Problems

AMES, Iowa – The potato is one of the most important vegetable crops in the world. The edible part is the underground swollen stem known as a tuber – which varies in size, shape, color, storability and culinary uses according to cultivar. ISU Extension and Outreach horticulturists explain potential potato skin problems and management of the issues causing them. 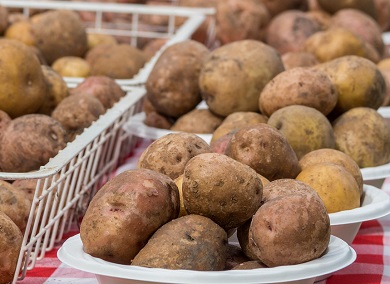 Why are some of my potato tubers green?

Potato tubers are enlarged underground stems. When potato tubers are exposed to light (either in the garden or storage), their skin turns green due to the formation of chlorophyll. The chlorophyll itself is not a problem. However, higher levels of glycoalkaloids also develop in the green tissue. Green tubers have a bitter taste when eaten. They may also cause an upset stomach and more serious health issues. Green portions should be cut off and discarded before boiling or baking the potatoes.

When growing potatoes in the garden, hill the soil around the base of the potato plants to prevent the tubers from being exposed to light. After harvesting, store potatoes in a dark location.

Why are some of my potato tubers rough or scabby?

Rough, corky patches on the surface of potato tubers is due to potato scab. Potato scab is caused by the bacterium Streptomyces scabies. Though unsightly, scabby potato tubers are still edible. Simply peel the potatoes before use.

Potato scab is most common in alkaline soils (soil pH above 7.0). However, lowering the soil pH is difficult and not a practical option for most home gardeners. The incidence of potato scab can be reduced by selecting and planting certified, disease-free potatoes in spring. Choose cultivars, such as ‘Superior’ and ‘Red Norland,’ that possess good resistance to potato scab. Also rotate the placement of potatoes in the garden. If possible, plant potatoes in the same area of the garden only once every three or four years.

Why do some of my potato tubers have cracks?

Growth cracks typically form when a prolonged dry period is followed by heavy rainfall or irrigation. The rapid uptake of water by the tubers causes them to split or crack. Cracking can be reduced by maintaining an even moisture supply during tuber development. Water on a regular basis during dry periods.

There are white, raised spots on my potatoes. Why?

White, raised spots on potato tubers are due to wet soil conditions. Potato tubers are enlarged underground stems. Lenticels are small openings in the tuber surface that allow for gas exchange. Saturated soils cause the lenticels to swell as gas exchange is impeded. Affected potatoes may not store as long as normal, but are safe to eat.