When it gets warm in the garden, the garden pests — worms, bugs and beetles — begin to feed and become a nuisance. Iowa State University Extension specialists offer a variety of ways to control some of the more common garden pests. Vegetable gardeners with questions about the management of other pests may contact the experts by emailing or calling the ISU Extension horticulture hotline at hortline@iastate.edu or 515-294-3108.

How can I control squash bugs? 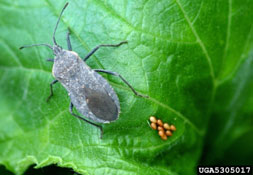 Squash bugs can be serious pests of summer and winter squash. Squash bugs have piercing-sucking mouthparts. Heavy feeding causes entire leaves to wilt, turn brown and die. Several methods can be used to control squash bugs in the garden. Brick red egg masses on the undersides of leaves and squash bug adults can be removed by hand. Adults can also be trapped under boards or shingles placed under the plants. Turn the objects over daily and collect and destroy the hiding squash bugs. Small, immature squash bugs (nymphs) can be controlled with insecticides, such as Sevin, permethrin or insecticidal soap. Sprays are generally more effective than dusts. If the squash plants are blooming, spray in the evening after the honey bees have quit foraging for the day. In fall, remove and destroy garden plant debris to deprive squash bugs of overwintering sites. (photo by Whitney Cranshaw, images.bugwood.org)

There are tiny holes in the foliage of my eggplants. What should I do?

The tiny holes are likely due to flea beetles. Flea beetles are the most common pest of eggplant in the home garden. Adults are tiny, shiny, black beetles. They possess large hind legs that enable them to jump. Flea beetles eat small, round holes in the eggplant foliage, resulting in “shothole” damage. Minor flea beetle damage will have little effect on crop yields. If significant damage begins to appear, treat plants with an insecticide. As always, carefully read and follow label directions when using pesticides.

How can I control Colorado potato beetles?

The Colorado potato beetle is difficult to control. Hand picking has been used since before the development of modern pesticides. Hand-pick beetles, eggs and small larvae from infested plants as soon as possible (practical for a few insects on a few plants, but impractical for larger gardens). It’s especially important to remove overwintering beetles that appear on young plants in spring.

In large gardens, insecticides are often the best option. When insecticides are necessary, consider timing, coverage and insecticide choice. Timing is critical. Small larvae are much easier to control and spraying when the larvae are small is much more effective than spraying when the larvae are large. Early treatment is also necessary to prevent crop loss. Complete and thorough coverage of infested plants is necessary for good control. Control is generally more effective with liquid sprays than with dust applications. (photo by Whitney Cranshaw, images.bugwood.org)

Because of decades of repeated insecticide use, the Colorado potato beetle is resistant to many widely used garden insecticides, such as Sevin. The first-choice products are the synthetic pyrethroids, such as permethrin, cyfluthrin and esfenvalerate. Look for products labeled for use on potatoes in the home garden and apply according to label directions. Spray early and spray often. Biorational pesticides, such as spinosad, Bt tenebrionis and Neem (azadirachtin) are only effective on very young larvae.

How do I control cabbageworms?

There are large green caterpillars with horn-like projections on my tomato plants. What are they and how can they be controlled?

The large green caterpillars are tomato hornworms. Tomato hornworms can be 4 to 5 inches long and nearly as big around as your thumb.

Tomato hornworms feed on the leaves and fruit of tomatoes and other vegetables including eggplant, potatoes and peppers. They can quickly defoliate portions of a plant, reduce its productivity and heavily damage the fruit.

In regards to control, one option is to pick them off by hand (they won’t hurt you). Another option is to use a biological insecticide known as Bacillus thuringiensis (Bt) or a synthetic home garden insecticide available at garden centers. Be sure to follow label directions.

Nonchemical Pest Control for the Home Lawn and Garden, RG 207