AMES, Iowa -- Rabbits and deer have been browsing on trees and shrubs in windbreaks, home orchards and landscape plantings over the last two months because of the extended period of snow cover across most of Iowa. The prognosis for the plants depends on the extent of damage. Iowa State University Extension and Outreach horticulturists describe how to assess the damage. 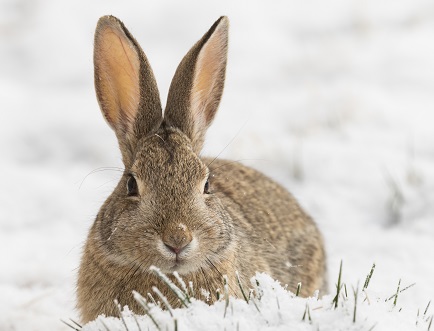 Rabbits have damaged several trees and shrubs in my yard. Will they survive?

Deciduous trees that have been girdled (the bark has been removed completely around the trunk) have essentially been destroyed. The best course of action is to replace the girdled trees. Wrapping the trunk or applying pruning paint to the damaged area will not save the tree. Most affected trees will sucker at their base. However, since most fruit and ornamental trees are propagated by grafting, suckers which originate from the rootstock will not produce a desirable tree.

Many deciduous shrubs have the ability to produce new shoots or suckers at their base. Because of this ability, severely damaged deciduous shrubs may recover within a few years. Girdled stems should be cut off just below the damaged areas.

Rabbits heavily damaged my raspberries over winter. Will they produce a crop this year?

The best strategy for home gardeners is to cut off the damaged canes at ground level in early spring. Place chicken wire or hardware cloth fencing around the raspberry planting in fall to prevent rabbit damage to the new canes over winter. The raspberries should produce fruit the following year.

Rabbit browsing should have little effect on the total crop yield of fall-bearing red raspberries.  Fall-bearing raspberries naturally produce two crops. The first crop is produced in late summer/early fall at the tips of the current season’s growth. The same canes produce a summer crop in the following year. Cut back the damaged canes at ground level in early spring. New canes should produce a good crop in late summer/early fall.

Deer have browsed on several of my evergreens. Will they recover?

The key to the condition of deer-damaged arborvitae, yews, pines and other evergreens is the presence of growing points or buds on the browsed branches. Branches that have had all their buds devoured by deer will not produce new growth in spring. As a result, some small evergreens may have been destroyed. Larger evergreens may have lost their lower branches. Since buds on arborvitae and yews are rather difficult to see, individuals should wait until late spring before taking any action. Branches that are completely bare (no green growth is present) in early June have been destroyed and can be removed.

Attracting Birds to Your Yard