Yard and Garden: Shrubs and Trees with Winter Color

AMES, Iowa — An excellent way to brighten the winter landscape is to plant trees and shrubs that possess ornamental characteristics, such as colorful fruit or exfoliating bark. Horticulturists with Iowa State University Extension and Outreach describe shrubs and trees that add color to the winter landscape. To have additional questions answered, contact Hortline at 515-294-3108 or hortline@iastate.edu.

Which shrubs have colorful bark in winter? 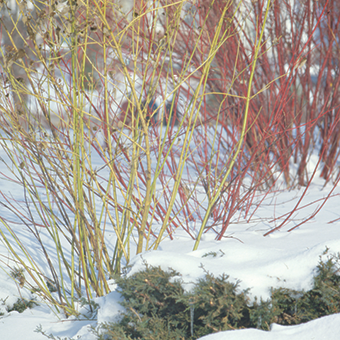 One of the most beautiful sights in winter is the bright red twigs of the redosier dogwood (Cornus sericea) set against a backdrop of newly fallen snow. Native to Iowa, the redosier dogwood grows 6 to 10 feet tall. Several colorful cultivars are available. ‘Cardinal’ has bright, cherry red stems. ‘Alleman’s Compact’ is a red-stemmed, compact cultivar that grows 4 to 5 feet tall. Arctic Fire™ is a red-stemmed, 3- to 4-foot-tall shrub. ‘Flaviramea’ is a 5- to 6-foot-tall shrub with yellow stems.

There are also several cultivars of willow that possess colorful bark. The ‘Flame’ willow (Salix ‘Flame’) has reddish orange stems. The stems of the coral bark willow (Salix alba ‘Britzensis’) vary from yellow-orange to orange-red.

The redosier dogwood and willows should be pruned on a frequent basis as young shoots possess the brightest colors. ‘Flame’ and coral bark willows should be pruned annually. Cut back plants to near ground level in late winter. The redosier dogwood requires less pruning. In late winter, remove approximately one-third of the oldest stems near ground level.

Which trees have attractive bark?

Selecting trees with attractive bark is an excellent way to add interest to the winter landscape.

Two small ornamental trees with exfoliating bark are the paperbark maple (Acer griseum) and Amur chokecherry (Prunus maackii). The paperbark maple grows 20 to 30 feet tall, possesses cinnamon to reddish brown exfoliating bark, and is hardy in USDA Hardiness Zones 5 to 8. The bark characteristics of the Amur chokecherry are highly variable. Bark color varies from brownish yellow to reddish brown to cinnamon red. Some exhibit little or no bark exfoliation, while others exfoliate heavily. The Amur chokecherry grows 30 to 35 feet tall.

Other trees with showy bark include the lacebark pine (Pinus bungeana) and Chinese or lacebark elm (Ulmus parvifolia). The bark of both trees exfoliates in patches revealing a kaleidoscope of colors. The multi-colored bark of the lacebark pine contains splashes of green, white, brown and purple, while the Chinese elm is spotted with brown, gray, green and orange.

Which trees and shrubs have colorful fruit in winter?

The brightly colored fruit of most of the aforementioned trees and shrubs do not remain throughout winter. Very cold temperatures in winter eventually cause many fruit to turn reddish brown or black. Hungry birds and squirrels may also devour the fruit. However, the fruit display in late fall and early winter can be spectacular.

2014 Garden Calendar is the Wonder of Trees

The 2014 garden calendar can be purchased at the Extension Online Store https://store.extension.iastate.edu/.