Although it is classed as a vegetable, rhubarb is used as a fruit because its high acidity gives it a tart flavor. Iowa State University Extension horticulture specialists answer gardeners’ questions about growing and using rhubarb. Whether questions come from gardeners planting their first rhubarb patch or maintaining an established planting, extension specialists answer questions using the most current research.

What would be a good planting site for rhubarb?

Rhubarb performs best in well-drained, fertile soils that are high in organic matter.  Heavy, clay soils often can be improved by incorporating organic matter, such as compost or well-rotted manure, into the upper 12 to 15 inches of soil. The planting site should also receive at least six to eight hours of direct sun each day. Avoid shady sites near trees and shrubs. 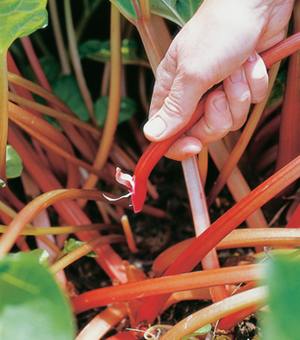 When can I start harvesting my newly planted rhubarb?

What is the correct way to harvest rhubarb?

Harvest rhubarb when the stalks are 10 to 15 inches long. Grasp the stalk near its base and pull up and slightly to one side. Immediately after harvesting the rhubarb, remove the leaf blades from the stalks with a sharp knife. Discard the foliage. The stalks can be placed in a plastic bag and stored in the refrigerator for two to four weeks.

When harvesting rhubarb, do not remove more than two-thirds of the fully developed stalks from any plant at any one time.

Are rhubarb leaves safe to put in the compost pile?

Although rhubarb leaves do contain poisonous oxalic acid, they can be placed in the compost pile. Oxalic acid, like other organic acids, is not readily absorbed by plant roots. Compost containing decomposed rhubarb leaves can be safely applied to the vegetable garden.

When should I stop harvesting rhubarb?

Gardeners should stop harvesting well established rhubarb plants in mid-June in Iowa.  Continued harvest through the summer months weakens the rhubarb plants and reduces the yield and quality of next year’s crop.

Can I harvest rhubarb in August?

If the rhubarb plants are vigorous, pulling a few stalks and preparing a dish for a special occasion in summer shouldn’t be a problem. Harvesting rhubarb in summer should be a one time event, not a frequent practice. Continued harvest through the summer months weakens the rhubarb plants and reduces the yield and quality of next year’s crop. In general, it’s best to stop harvesting rhubarb in mid-June in Iowa.

Why is my rhubarb flowering?

Flower development is natural for rhubarb and most other plants. Drought, extreme heat and infertile soils may encourage flowering. Age is another factor. Old plants tend to flower more than young ones.

Regardless of the reason, flower stalks should be promptly pulled and discarded. Plants will be less productive if allowed to flower and set seeds.

Flower formation can be discouraged with good cultural practices. Water rhubarb plants every seven to 10 days during dry weather. Sprinkle ½ cup of an all-purpose garden fertilizer, such as 10-10-10, around each plant in early spring. Control weeds by shallow hoeing, hand pulling or mulching.

Rhubarb in the Home Garden

How to Plant Rhubarb (video)

How to Plant Rhubarb (audio)