Yard and Garden: Raspberries and Blackberries 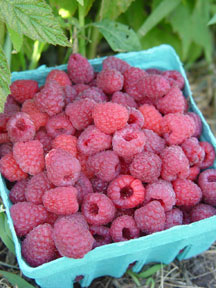 What would be a good planting site for raspberries?

Raspberries are adaptable to a wide range of soil types. They grow best in well-drained, fertile soils with a pH of 6.0 to 6.8. Raspberries grow poorly in heavy clay or poorly drained soils. Raspberries are more susceptible to diseases, such as Phytophthora root rot, in wet, poorly drained soils. Poor soils often can be improved by incorporating well-rotted barnyard manure or compost. Planting in raised beds also can improve drainage. When selecting a planting site, choose an area that receives full sun. The planting site should receive at least six hours of direct sun each day. Avoid shady areas near large trees and shrubs. Also, avoid areas that are heavily infested with perennial weeds. Perennial weeds, such as quackgrass, are extremely difficult to control in a raspberry planting. If possible, remove all wild brambles near the site to prevent the spread of virus diseases to the raspberry planting.

What are some good raspberry varieties for Iowa?

When should I plant dormant, bare-root raspberry plants in Iowa?

Remove the dormant, bare-root plants from storage when ready to plant. If the roots of the raspberry plants are dry, soak them in water for several hours before planting. Set the raspberry plants slightly deeper into the soil than they were at the nursery. Plant yellow and red raspberries 2 inches deeper, while black and purple raspberries should be planted 1 inch deeper than previously grown. Dig a hole that is slightly larger than the spread of the plant’s root system. Position the plant in the center of the hole, spread out its roots, then backfill with soil. Water each plant thoroughly, then prune back the canes, leaving a maximum of 2 to 3 inches above the soil.

I would like to plant some raspberries this spring. Is it best to purchase plants from a garden center or can I transplant some from a neighbor’s garden?

Can blackberries be successfully grown in Iowa?

The growth and fruiting characteristics of blackberries are similar to raspberries. The blackberry plant’s roots and crown are perennial, while its stems or canes are biennial. Blackberry canes are strictly vegetative during the first growing season. These first year canes are referred to as primocanes. The following year, these same canes (now called floricanes) flower, produce fruit and then die.

In Iowa, the canes of most blackberry varieties suffer extensive winter injury. As a result of this damage, plants produce little or no fruit. However, there are two hardy varieties that can be successfully grown in the southern half of the state. ‘Darrow’ produces large fruit on vigorous, erect, thorny canes. ‘Illini Hardy’ bears medium-sized fruit. The fruit are produced on vigorous, erect, thorny canes. Primocane-bearing blackberry varieties are another option for home gardeners in Iowa. The canes of primocane-bearing blackberries don’t need to survive the winter as they produce fruit in late summer/early fall on the current year’s growth. Prime-Jim™ and Prime-Jan™ are erect, thorny plants. Fruit are medium-sized, conical, soft, good flavored and glossy black in color. In Iowa, gardeners should prune the canes of Prime-Jim™ and Prime-Jan™ back to ground level in late winter.