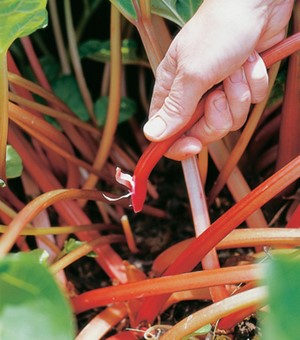 AMES, Iowa -- Rhubarb has long been a popular crop to grow in the home garden. In this week’s Yard and Garden entry, Iowa State University Extension and Outreach horticulture specialists Ajay Nair and Patrick O’Malley give answers and advice on some frequently asked questions about rhubarb.

What are the best rhubarb varieties for home gardens?

The cultivars ‘Canada Red,’ ‘Crimson Red,’ ‘MacDonald’ and ‘Valentine’ have attractive red stalks and are good choices for Iowa gardens. ‘Victoria’ is a reliable, green-stalked cultivar. Rhubarb plants can be purchased from garden centers and mail-order companies.

Is it safe to eat rhubarb after the plants have been exposed to freezing temperatures?

After freezing temperatures, some gardeners express concerns about the edibility of rhubarb. Rhubarb is a tough plant. Temperatures in the upper 20s or low 30s usually cause little or no damage. A hard freeze (temperatures in the mid-20s or lower) is usually required to cause serious damage. Rhubarb damaged by freezing temperatures will have black, shriveled leaves and soft, limp leaf stalks. It’s safe to harvest rhubarb if the plants show no signs of damage two or three days after the freeze event. Damaged rhubarb stalks (blackened foliage and limp stalks) should be pulled and discarded. New stalks that emerge after the freeze are safe to harvest.

My rhubarb plants are blooming. What should I do?

The flower stalks should be promptly pulled and discarded. Plant vigor and next year’s production will be reduced if the plants are allowed to flower and set seed.

Flower formation may have been induced by stressful growing conditions, such as drought, extreme heat or infertile soils. Age also may be a factor. Old plants tend to flower more than younger ones. Flower formation can be discouraged by following good cultural practices. Sprinkle one-half cup of an all-purpose garden fertilizer, such as 10-10-10, around each plant in early spring. Stop harvesting rhubarb in mid-June. Water rhubarb plants once a week during prolonged dry periods. Dig and divide large, old rhubarb plants in early spring or late summer.

When should I stop harvesting rhubarb?

Gardeners should stop harvesting well-established rhubarb plants in mid-June in Iowa. Continued harvest through the summer months weakens the rhubarb plants and reduces the yield and quality of next year’s crop.

When can I transplant or divide rhubarb?

Early spring is an excellent time to transplant rhubarb. As soon as the ground is workable, carefully dig up the plants in early spring before growth begins. Dig deeply to insure getting a large portion of each plant’s root system. Large rhubarb plants can also be divided. Divide large clumps with a sharp spade or butcher knife. Each section (division) should have at least two or three buds and a portion of the root system.

Replant the rhubarb as soon as possible. The roots must not be allowed to dry out prior to planting. If the rhubarb can’t be planted immediately, place the clumps in a plastic bag and store them in a cool, dark location. This temporary storage should be fine for a few days.

Rhubarb is easy to grow. It performs best in full sun. Avoid shady sites near large trees or shrubs. Rhubarb also requires fertile, well-drained soils that are high in organic matter. Sandy and clay soils can be improved by incorporating large quantities of compost or other forms of organic matter into the soil before planting.

When planting rhubarb, place each section upright in the planting hole with the buds 1 to 2 inches below the soil surface. Space the plants about 3 feet apart. After planting, water thoroughly. Continue to water the plants throughout the first growing season. During dry weather, a deep soaking every seven to 10 days should be adequate.

Rhubarb also can be transplanted in early fall (mid-September to early October). Mulch fall planted rhubarb with several inches of straw in mid-November.

When can I start harvesting newly planted rhubarb?

For more information, check out Rhubarb in the Home Garden in the Extension Store.