AMES, Iowa — Pruning is the selective removal of specific plant parts for the benefit of the whole plant. Horticulturists offer recommendations for pruning common home landscape shrubs. To have additional questions answered, contact the horticulturists at Hortline by calling 515-294-3108 or emailing hortline @iastate.edu.

What is the best way to prune large, overgrown shrubs?

Proper pruning can renew or rejuvenate overgrown lilacs, dogwoods, privets, forsythias and many other deciduous shrubs. One option is to prune the shrubs back over a three year period. Begin by removing one-third of the largest, oldest stems at ground level in late winter/early spring (March or early April). The following year (again in March or early April), prune out one-half of the remaining old stems. Also, thin out some of the new growth. Retain several well-spaced, vigorous, new shoots and remove all of the others. Finally, remove all of the remaining old wood in late winter/early spring of the third year. Additional thinning of new shoots also should be done.

A second way to prune overgrown, deciduous shrubs is to cut the shrubs back to within 3 to 4 inches of the ground in March or early April. This type of pruning induces shrubs to produce a large number of new shoots. The new shoots grow rapidly and may be several feet tall by the end of summer. In late winter of the following year, select and retain several strong, healthy shoots and remove all others at ground level. Head (cut) back the retained shoots to encourage branching. (Lilacs rejuvenated by this method will likely not bloom for two to three years.)

How should I prune my hydrangeas?

Three species of hydrangea are commonly grown in Iowa. Pruning practices are based on the flowering characteristics of each species. 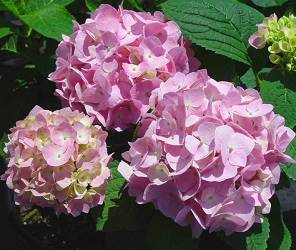 The smooth hydrangea (Hydrangea arborescens) grows 4 to 5 feet tall. Smooth hydrangeas bloom on new growth. Plants produce white flowers in flat to roundish clusters in late spring and summer. ‘Annabelle’ is a widely grown cultivar. Smooth hydrangeas can be pruned back to the ground in March or early April.

The panicle hydrangea (Hydrangea paniculata) is a large shrub that grows to a height of 10 to 12 feet. Panicle hydrangeas bloom on new growth. Plants produce cone-shaped flower clusters in late summer. Flowers are initially creamy white, but gradually change to pink or dark rose. Several cultivars, such as ‘Grandiflora’ (commonly known as PeeGee hydrangea) and ‘Tardiva,’ are available. The size of panicle hydrangeas can be reduced by selectively removing a few branches in March or early April. Rejuvenation pruning (removal of several of the largest stems near ground level) of large, old shrubs can also be done in late winter/early spring.

Numerous cultivars of bigleaf hydrangea (Hydrangea macrophylla) are available. Flower color is determined by soil pH. In acidic soils, flowers are blue. Flowers are pink in alkaline soils. Most older cultivars, such as ‘Forever Pink’ and ‘Nikko Blue,’ bloom strictly on the previous year’s growth. Unfortunately, ‘Forever Pink,’ ‘Nikko Blue,’ and most older cultivars do not bloom well in Iowa as plants often die back to the ground in winter.

For maximum bloom, wait until the shrubs begin to leaf out before pruning bigleaf hydrangeas. When growth appears, prune out all dead wood.

My Japanese spireas are straggly in appearance. How should I prune them?

Japanese spireas (Spiraea japonica) are small shrubs that grow 2 to 3 feet tall. Plants produce clusters of small pink flowers in summer. Numerous cultivars are available. The best way to renew or rejuvenate straggly Japanese spireas is to prune them back to within 3 to 4 inches of the ground in late winter/early spring (March or early April in Iowa). The shrubs will grow back and quickly develop into attractive plants. For best performance, Japanese spireas should be rejuvenated every two or three years.