For some home gardeners, pruning shrubs is a difficult, confusing chore. However, it’s not difficult if you know the proper time to prune shrubs and understand basic pruning practices. Follow the recommendations of Iowa State University horticulture specialists for successful shrub pruning. Contact the Hortline at hortline@iastate.edu, or 515-294-3108, with any additional questions.

What if my shrubs are overgrown? 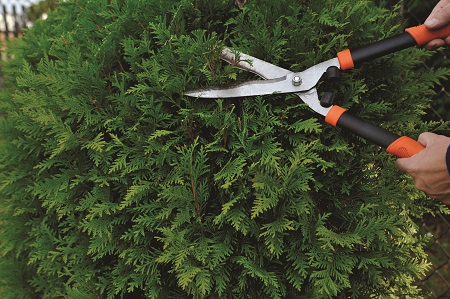 The best time to prune healthy, well-maintained spring-flowering shrubs is immediately after flowering. Healthy, well-maintained shrubs should require only light to moderate pruning. Pruning immediately after flowering allows gardeners to enjoy the spring flower display and provides adequate time for the shrubs to initiate new flower buds for next season.

Some deciduous shrubs, such as winged euonymus (burning bush), alpine currant and fragrant sumac, don’t produce attractive flowers. These shrubs may possess colorful foliage, bark, fruit, or some other ornamental feature. Prune these shrubs in late winter or early spring before growth begins.

Proper pruning can renew or rejuvenate overgrown, deciduous shrubs. One method is to prune them back over a three-year period. Begin by removing one-third of the large, old stems near ground level in late winter/early spring (March or early April). The following year (again in March or early April), prune out one-half of the remaining old stems. Also, thin out some of the new growth. Retain several well-spaced, vigorous shoots and remove all the others. Finally, remove all of the remaining old wood in late winter/early spring of the third year. Additional thinning of new shoots should also be done.

A second way to prune overgrown, deciduous shrubs is to cut them back to within 3-4 inches of the ground in March or early April. This type of pruning will induce a large number of shoots to develop during the growing season. In late winter of the following year, select and retain several strong, healthy shoots and remove all others at ground level. Head (cut) back the retained shoots to encourage branching. Large, overgrown lilacs, dogwoods, spireas, and forsythias may be pruned in this manner. Lilacs rejuvenated by this method will not bloom for two or three years.

What about evergreen shrubs?

Only a few broad-leaved evergreen shrubs, such as boxwood and rhododendron, can be successfully grown in Iowa. Boxwoods often experience dieback in severe winters. Prune out dead growth in early spring (early to mid-April). Light pruning/shearing (to shape plants) can be done from spring to mid-summer. Do not prune boxwoods in late summer as late-season growth may not have sufficient time to harden before winter. Rhododendrons generally require little pruning. The best time to prune rhododendrons is immediately after flowering.