Yard and Garden: Planting and Growing Holly Varieties in Iowa

AMES, Iowa – Holly is a decorative and festive part of the holiday season, and quite a few varieties are available. Iowa State University Extension and Outreach horticulturists discuss the history of this seasonal favorite and offer tips on selecting hollies that perform well in Iowa.

How did holly become associated with the Christmas holiday?

Holly was considered sacred by the ancient Romans. Holly was used to honor Saturn, god of agriculture, during the Saturnalia festival held during the winter solstice. The Romans gave one another holly wreaths, carried it in processions and adorned images of Saturn with it. During the early years of Christianity in Rome, many Christians continued to decorate their homes with holly to avoid detection and persecution by Roman authorities. Gradually, holly became a symbol of Christmas as Christianity became the dominant religion of the empire. 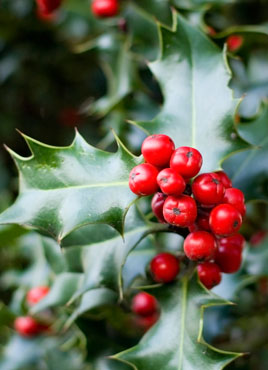 What is meant by the term dioecious?  How does this affect the planting of hollies?

Hollies are dioecious. Only female plants produce attractive, berry-like fruit. When planting hollies, a male cultivar must be planted in the same general area as the female hollies for pollination and fruit set. One male plant is usually adequate for several female plants.

Can hollies be successfully grown in Iowa?

American holly (Ilex opaca) and English holly (Ilex aquifolium) are prized for their glossy, green leaves and red, berry-like fruit. Sprigs of both hollies are often used in wreaths, centerpieces and other Christmas decorations. Unfortunately, American and English hollies don’t perform well in Iowa. However, Meserve hybrid hollies (Ilex x meserveae) and winterberry (Ilex verticillata) can be successfully grown in the state.

Meserve hybrid hollies, like most holly species, are evergreens. ‘Blue Prince,’ ‘Blue Princess,’ ‘Blue Boy’ and ‘Blue Girl’ have dark, bluish green foliage and are often referred to as blue hollies. Other attractive Meserve hybrids include China Boy®, China Girl®, Castle Spire® (female), and Castle Wall® (male). Female cultivars produce attractive red fruit. Meserve hollies are variable in height. Most cultivars grow 5 to 10 feet tall. They are hardy to -20 degrees Fahrenheit (USDA Hardiness Zone 5). In Iowa, Meserve hollies perform best in the southern two-thirds of the state. Meserve hollies are susceptible to desiccation injury from the sun and dry winds in winter. When selecting a planting site, choose a protected location, such as on the east side of a building.

Winterberry is a deciduous shrub that grows 8 to 10 feet tall. (Deciduous trees and shrubs lose all of their leaves in fall.) The fruit on female plants turn bright red in fall and persist into winter. Excellent fruiting cultivars include ‘Afterglow,’ ‘Red Sprite,’ ‘Shaver,’ ‘Sparkleberry’ and ‘Winter Red.’ ‘Jim Dandy’ is a good pollinator for ‘Afterglow,’ ‘Red Sprite’ and ‘Shaver.’  ‘Southern Gentleman’ pollinates ‘Sparkleberry’ and ‘Winter Red.’ Winterberry performs best in moist, acidic soils. Plants can be grown in partial shade to full sun. Best fruiting occurs in areas that receive at least six hours of direct sun each day.