While many of them are taller, clump-forming, and bloom late in the season, there are ornamental grasses of all heights, growth patterns and bloom times that can brighten the landscape in any season, including winter. In this article, horticulturists with Iowa State University Extension and Outreach answer questions about growing perennial ornamental grasses in your landscape.

How do I care for ornamental grasses?

Ornamental grasses are low-maintenance perennials. Most thrive in sunny sites and there are species that can grow in dry, well-drained or wet soils. While small in the nursery, many can get quite large in just a couple of years so check the labels carefully for mature size and site preferences. Once established, grasses need minimal care requiring watering only in times of drought. Ornamental grasses rarely need fertilizer. If growth is pale, weak or floppy, scatter some granular fertilizer around them in the spring. 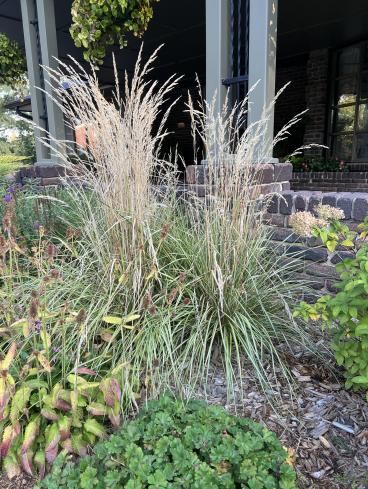 Let grasses and their ornamental flower heads stand all winter. Even when tan and dead, they are quite attractive after a snowfall. Cut back ornamental grasses in early spring before the new growth appears. Division is sometimes necessary to keep ornamental grasses thriving in the landscape. If the center of the clump begins to thin or die out, divide in early spring just as the new growth appears.

What ornamental grasses are well-suited for Iowa?

Many ornamental grasses will easily reach heights of 5 feet or more. Tall grasses for the back of the perennial border include natives such as switchgrass (Panicum virgatum ), Indian grass (Sorghastrum nutans) and big bluestem (Andropogon gerardi). Other species that perform well in Iowa include feather reed grass (Calamagrostis × acutiflora), Japanese silvergrass (Miscanthus sinensis), purple moor grass (Molinia caerulea) and giant miscanthus (Miscanthus ‘Giganteus’). Most of these species have several different cultivars with different sizes, colors and variegation, and some even feature great fall color.

What grasses are good for shady areas?

The best grasses for shade are not grasses at all but closely related sedges. In general, sedges tolerate shade better than most ornamental grasses and often thrive in wet conditions although there are hundreds of species of sedges that grow well in many different soil and light conditions. Sedges to try in shady locations include native species such as palm sedge (Carex muskingumensis), Pennsylvania sedge (C. pensylvanica), and porcupine sedge (C. hystericina). Other species to try include Bowles golden sedge (Carex elata 'Aurea'), carnation sedge (C. flacca), and the closely related woodrush (Luzula sylvatica), which is neither a true grass nor a sedge, but sill grass-like and shade tolerant.

Can I grow pampas grass in Iowa?

There are several species of ornamental grass that are referred to as “pampas grass.” They all feature large, feathery, plume-like flower heads later in the growing season. True pampas grass (Cortaderia selloana) is native to South America, grows 8 to 12 feet tall, and features highly ornamental, huge, feathery, silvery-white plumes. This species is hardy to USDA Hardiness Zone 8 and will not overwinter in any part of Iowa. Only those grasses hardy to Zones 4 and 5 can survive in Iowa.

Another species often referred to as “pampas grass” is more appropriately called silver banner grass or Amur silver grass (Miscanthus sacchariflorus). This Asian-native species spreads aggressively by seeds and runners, especially in wet areas like roadside ditches. This invasive grass is not recommended for home landscapes despite its attractive, feathery silver plumes and being winter hardy in all of Iowa.

Ravenna grass (Saccharum ravennae, syn. Erianthus ravennae) is also known as hardy pampas grass. This winter hardy species develops purplish plume-like flowers that fade to a soft silver in fall and can reach up to 12 feet tall. This clump-forming species grows best in full sun and moist, well-drained to dry soils. While it won’t spread aggressively by runners, in warmer climates it can at times spread by seed.