AMES, Iowa — Twelve species of oak trees native to Iowa are frequently found in landscapes and timbers across the state. The oak, a symbol of strength, was named the State Tree of Iowa in 1961. Besides being a state symbol, the oak provides shelter, food and nesting cover for a variety of Iowa wildlife. Horticulturists with Iowa State University Extension and Outreach describe and explain some abnormalities that occur in Iowa oaks. 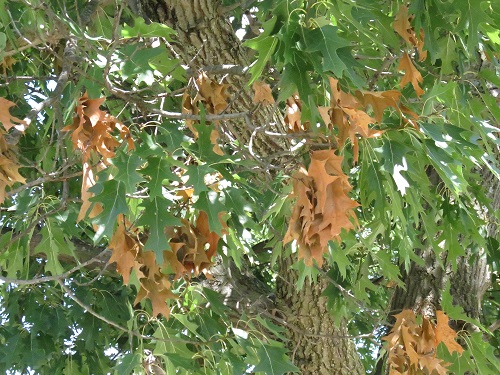 There are brown leafy twigs scattered throughout the canopy of my red oak. What is the problem?

The twig pruner and twig girdler are two long-horned beetles that can also cause branch dieback in oaks. Branch tips destroyed by the twig pruner and twig girdler eventually break off and fall from trees. In contrast, the dead twigs produced by Botryosphaeria twig canker remain in the tree through fall. Botryosphaeria twig canker differs from oak wilt in that only the tips of branches are affected. Oak wilt affects whole branches.

There are round growths on several leaves on my oak tree. What are they? 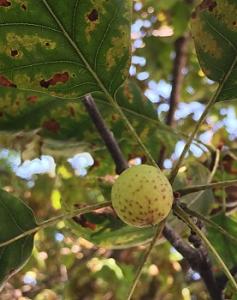 The round growths are likely oak apple galls. Galls are abnormal growths of plant tissue induced to form by mites, insects or other gallmakers. The gallmaker responsible for oak apple galls is a small wasp. Oak apple galls are green, up to 2 inches in diameter, and are named for their resemblance to small apples. Female wasps inject a gall-inducing chemical into plant tissue along with her eggs. The resulting galls provide protective homes and food for the wasp larvae.  The galls eventually become light brown upon the emergence of the adult wasps.

Oaks are hosts to numerous types of galls. The galls vary in size, shape and color. They may be found on leaves, leaf petioles, twigs and branches. Wasps, midges and other gallmakers are responsible for the various galls. Fortunately, most galls do not cause serious harm to healthy trees. Galls cannot be “cured” after they have formed. Preventive insecticide treatments are seldom warranted and usually ineffective.

Why are the leaves on my pin oak yellow-green?

In Iowa, the foliage of the pin oak (Quercus palustris) often turns a sickly yellow-green. The yellow-green foliage is due to a deficiency of iron. The problem is referred to as iron chlorosis. A close examination of chlorotic leaves reveals that while most of the leaf is yellow-green, the tissue around the major veins is a darker green. Most soils in Iowa contain sufficient amounts of iron. However, in alkaline soils (those with a pH above 7.0), pin oaks are unable to absorb adequate amounts of iron. Chlorotic pin oaks are rather common in Iowa as many soils in the state are slightly alkaline.

Correcting an iron chlorosis problem is difficult. Applying additional iron to the soil usually does not help. The soil already contains sufficient amounts of iron. Adding more iron doesn’t overcome the problem. Lowering the soil pH to 6.0 to 6.5 would allow the roots of the pin oak to more readily absorb iron in the soil. Unfortunately, lowering the soil pH is extremely difficult, if not impossible.

An injection of an iron-containing compound directly into the trunks of chlorotic trees by professional arborists is often effective. The effects of a trunk injection may last two or three years.