AMES, Iowa -- Some pests on trees are conspicuous. These easy-to-spot pests can be disconcerting; however, don’t panic, as many don’t cause serious harm to trees. For more information on pests and taking care of landscape plants, contact the horticulture specialists at hortline@iastate.edu.

There are small, white objects resembling kernels of popcorn on the branches of my silver maple tree. What are they?

The small, white, popcorn-like objects are likely cottony maple scale (Pulvinaria innumerabilis). Cottony maple scale is an insect. It is most commonly found on silver maple trees. However, it can also be found on other maples, oak, linden, hackberry, honey locust and other trees.

In June, female scales begin to produce large, white, cottony egg sacs that may grow to the size of dimes (up to a ½-inch in diameter). Large numbers of egg sacs look like popcorn strung along branches and twigs. 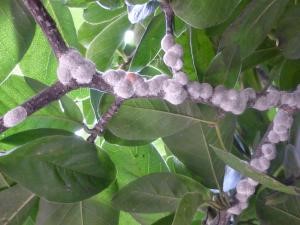 The eggs within the expanded egg sacs (up to 1,000 eggs per sac) begin to hatch in early July. The new scale nymphs crawl to the undersides of leaves where they feed on sap from the leaf tissue. The scales grow to adulthood on the leaves and mate in August or September. After mating, the females return to the tree’s twigs to spend the winter. There is one generation per year.

Cottony maple scale insects excrete a clear, sticky substance called honeydew. The honeydew drops onto leaves on the lower portions of infested trees. It also drops onto plants or other objects (patio furniture, cars, driveways, etc.) beneath trees. Oftentimes, a sooty mold fungus colonizes the honeydew, resulting in a black sooty appearance on leaves, branches, and other objects.

Cottony maple scale usually causes little harm to healthy trees. Natural predators (such as lady beetles), parasites and adverse weather conditions typically control an infestation within one or two years. Treatment of cottony maple scale with insecticides may do more harm than good, as the insecticide may kill the scale’s predators and parasites.

There are small masses of foam-like material in my pine tree. What are they?

The foam-like masses in the pine tree were likely created by the pine spittlebug (Aphrophora parallela). Spittlebugs are a small group of sap-feeding insects. Spittlebugs are easily recognizable because of the foamy mass of “spit” that surrounds the spittlebug nymphs (the immature stage of the insect) as they feed on sap from their host plants. The foamy spittle protects the nymphs from predators and desiccation. The pine spittlebug feeds on Scotch, Austrian, and eastern white pine, spruces, and firs.

There are small, red bumps on the leaves of my maple tree. Should I be concerned?

The small, red bumps on the maple leaves are maple bladder galls. Maple bladder galls are a “pouch” gall. They are caused by a tiny mite. Adult mites spend the winter under the bark and other protected locations on trees. In early spring, the adults move to developing leaves and begin feeding. The leaf responds to the small irritation by rapidly producing extra cells that form the abnormal growth at the feeding site. The gall encloses the mite, which continues to feed and lay numerous eggs within the gall. At first, the galls are light green in color. They quickly turn bright red and finally black by the end of summer.

Maple bladder galls cause little harm to healthy, well-established trees. It’s best to ignore the presence of maple bladder galls on trees. Preventive sprays are not practical. Nothing can be done after the galls have formed.