AMES, Iowa – Impatiens are a bright, cheerful annual that gardeners use to light up dark and shady areas of the yard and garden. Knowing a few things about impatiens care makes them quite easy to grow. Horticulturists with Iowa State University Extension and Outreach share information about commonly planted impatiens. 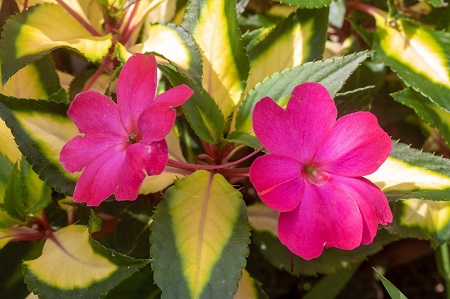 Which impatiens can be successfully grown in home gardens?

The common garden impatiens, New Guinea impatiens and SunPatiens are the three most widely planted impatiens in home landscapes.

The common garden impatiens (Impatiens walleriana) have been a popular bedding plant in the United States for many years. Garden impatiens are easy to grow and bloom continuously from spring until the first fall frost. Garden impatiens have glossy, medium green leaves. Flowers are 1 to 2 inches in diameter, may be single or double and come in a wide variety of colors. Plants commonly grow 12 to 18 inches tall.

New Guinea impatiens (Impatiens hawkeri) are native to New Guinea and the Solomon Islands.  They were introduced to the United States in the early 1970s. A large number of cultivars have been introduced in the last 25 to 30 years. New Guinea impatiens have green, bronze or variegated leaves and large, showy flowers. Flowers can be up to 3 inches in diameter. Flower colors vary from white and pale pink to bright pink, red, violet and orange.

SunPatiens are hybrid crosses between New Guinea impatiens and wild impatiens. Plants in the Compact Series grow approximately 18 to 30 inches tall, while those in the Vigorous Series grow 24 to 36 inches tall. Flowers are up to 3 inches in diameter and available in shades of orange, salmon, coral, pink, red, orchid, lavender and white. Leaves vary from light to dark green, with a few cultivars having variegated foliage.

What are good planting locations for impatiens?

Garden impatiens prefer sites that receive two to four hours of sun each day. Garden impatiens can also be grown in full shade. However, plants will be taller and bloom less profusely in fully shaded locations.

SunPatiens are more versatile. They can be successfully grown in full sun to part shade. Avoid sites in full shade.

Should I be concerned about impatiens downy mildew if I plant impatiens?