AMES, Iowa – Fall is the perfect season for apples and apple orchards. But what about crabapples? How do they differ from apples? Are they OK to eat? And which varieties are best to use?

Iowa State University Extension and Outreach horticulturists can help answer questions about crabapples and the best ways to enjoy them.

What is the difference between an apple and a crabapple? 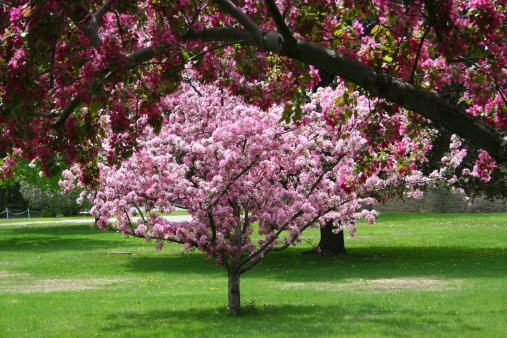 Crabapple fruit are edible. Crabapples can be used for jellies and preserves. The fruit of most modern crabapple cultivars aren’t very useful as they are quite small. Large-fruited cultivars, such as ‘Whitney’ and ‘Chestnut’ are best for culinary uses.

Which crabapples have attractive fruit?

Why did my crabapple lose many of its leaves by mid-summer?

The loss of leaves was probably due to apple scab. Apple scab is caused by the fungus Venturia inaequalis and is a serious problem on susceptible crabapple cultivars. Apple scab appears as olive-green to dark brown spots on the foliage. Infected leaves eventually turn yellow and fall prematurely. Highly susceptible crabapple cultivars may lose a majority of their leaves by mid-summer. The premature leaf drop weakens trees, but doesn’t kill them. The damage is mainly aesthetic. Heavily defoliated trees are unattractive.

Apple scab may be prevented by the application of fungicides, such as chlorothalonil, from just prior to bloom until mid-June. Infections are less likely to occur with the arrival of warmer, drier weather in early summer. For most home gardeners, however, controlling apple scab with fungicides is laborious and not very practical. Sanitation is another control option. Raking and destroying the leaves as they fall should reduce the severity of the disease next season as the fungus overwinters on partially decayed leaves.