Yard and Garden: Handling and Caring for Garden Phlox

AMES, Iowa – Garden phlox is a beautiful way to add color to the garden in perennial fashion. The flowers, when healthy, are lovely to look at and can provide visual appeal for years to come.

Iowa State University Extension and Outreach horticulturists can help answer questions regarding garden phlox and keep it a valuable part of the garden landscape.

How can I control powdery mildew on garden phlox?

Powdery mildew is most commonly found on plants growing in shady areas and in crowded plantings with poor air circulation. Optimal conditions for powdery mildew are cool nights followed by warm days.

Cultural practices can reduce the severity of powdery mildew on garden phlox. The amount of disease inoculum can be reduced by cutting off and removing diseased plant debris in fall. Plants growing in shady locations should be moved to sunny areas. In overcrowded plantings, improve air circulation by digging and dividing perennials.

While cultural practices are helpful, fungicides may be necessary to control powdery mildew on garden phlox. To be effective, fungicides should be applied at the first sign of the disease and repeated on a regular basis. 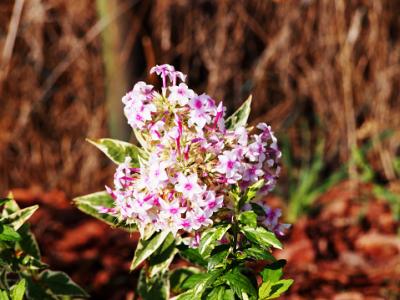 When can I divide garden phlox?

Garden phlox can be divided in spring or late summer. In spring, dig up plants just as new growth begins to appear. Divide each clump into sections with a sharp knife. Each division should contain at least two or three shoots and a portion of the root system. Replant the divisions immediately. Keep the newly divided perennials well-watered through spring and summer. Late summer (mid-August to late September) is also a suitable time to divide garden phlox. Dig up the entire plant, divide the clump into sections, and replant immediately.

Plants divided in late summer should be mulched in mid- to late November. A 4 to 6-inch layer of straw, pine needles or similar material should prevent repeated freezing and thawing of the soil during the winter months that could heave late summer planted divisions out of the ground, causing severe damage or death. Remove the mulch in early spring.

Should garden phlox be deadheaded?

Deadheading is the removal of spent or faded flowers. There are several benefits to deadheading garden phlox. Deadheading improves the appearance of plants, may encourage a second flush of bloom and prevents self-seeding. (Garden phlox freely reseeds itself. However, most cultivars do not come from seeds. Seedlings are usually inferior plants. Large numbers can become weedy.)