AMES, Iowa – The potato is one of the most important vegetable crops in the world and a popular plant in any home garden. However, there’s a lot to know about growing and storing potatoes properly. Iowa State University Extension and Outreach horticulturists have some tips on how to grow and store potatoes. 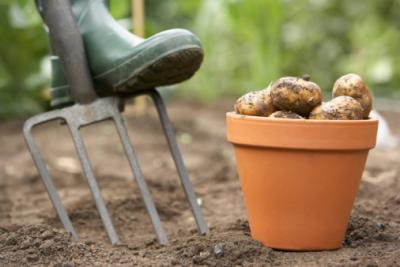 When should I harvest potatoes?

Potatoes grown for storage should be harvested after the vines have died and the crop is mature. To check crop maturity, dig up one or two hills after the plants have died. If the skins on the tubers are thin and rub off easily, the crop is not fully mature. Allow the crop to mature for several more days before harvesting the potatoes. When harvesting potatoes, it is best to avoid bruising, skinning or cutting the tubers. Damaged potatoes should be used as soon as possible.

Before placing the potatoes in storage, cure the tubers at a temperature of 50 to 60 degrees Fahrenheit and high relative humidity, about 85 to 90 percent, for two weeks. The curing period allows minor cuts and bruises to heal. Thickening of the skin also occurs during the curing process.

Once cured, store potatoes at a temperature of 40 F and relative humidity of 90 to 95 percent.

Why are my potatoes knobby?

Fluctuations in soil moisture levels during tuber development may cause knobby potatoes. Watering on a regular basis, about once a week, during dry periods will help prevent this problem.

There are white, raised spots on my potatoes. Why?

The white, raised spots on your potatoes are probably swollen lenticels due to wet soil conditions. Potato tubers are enlarged underground stems. Lenticels are small openings in the tuber surface that allow for gas exchange. Saturated soils may cause the lenticels to swell as gas exchange is impeded. Affected potatoes may not store as long as normal, but are perfectly safe to eat.

Why are some of my potato tubers green?

The potato tubers were likely exposed to light, either in the garden or storage. The skin on tubers exposed to light turns green due to the formation of chlorophyll. The chlorophyll itself is not a problem. However, higher levels of glycoalkaloids also develop in the green tissue. Green tubers have a bitter taste when eaten. They may also cause an upset stomach and more serious health problems.

Tubers with small green areas can be safely eaten if the green portions are cut off and discarded. It would be best to discard potatoes that are largely green.

When growing potatoes in the garden, hill soil around the base of the potato plants to prevent the tubers from being exposed to light. After harvesting, store potatoes in a dark location.