AMES, Iowa -- Cabbage is a “cole crop,” a general term used to describe several vegetables in the mustard family, including broccoli, Brussels sprouts, cabbage, cauliflower, collards, kale and kohlrabi. All cole crops are cultivated varieties of the species Brassica oleracea. They are cool-season vegetables that prefer 60 to 70 degress Fahrenheit temperatures for optimal growth and can withstand light frosts without injury. 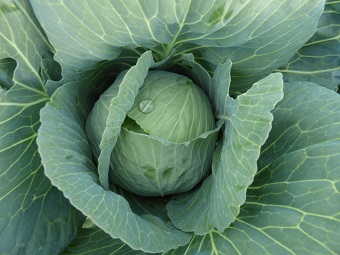 Iowa State University Extension and Outreach horticulturists offer tips on growing cabbage in the home garden. For more information, contact the ISU Hortline at 515-294-3108 or hortline@iastate.edu.

When should I sow cabbage seeds indoors?

Sow cabbage, broccoli and cauliflower seeds indoors four to five weeks before the intended outdoor planting date. Start seeds indoors using a commercial germination medium. After the seeds have been sown, cover with an additional quarter inch of material. Moisten the germination medium and keep it consistently moist. The optimum temperature for germination is 70 to 75 F. The seeds should germinate within five to seven days with consistent moisture and favorable temperatures. Immediately after germination, place the seedlings under fluorescent lights in a cool (55-65 F) location. High light levels and cool temperatures will prevent the seedlings from getting tall and spindly. Transplant the seedlings into individual pots or plastic cell packs one week after germination. Harden (acclimate) the seedlings in a protected outdoor location for a few days prior to planting in the garden. Initially, place the seedlings in a shady location and gradually expose the plants to longer periods of sunlight.

What are some good cabbage varieties for Iowa?

When can I plant cabbage seedlings in the garden?

Cabbage, broccoli and cauliflower seedlings can be planted outdoors in early April in southern Iowa, mid-April in central portions of the state and late April in northern counties. Plants purchased at a greenhouse or started indoors should be hardened outdoors for several days prior to planting.

Cabbage, broccoli and cauliflower perform best in moist, well-drained soils. They also require full sun. The planting site should receive at least six hours of direct sun each day. When planting, space transplants 24 inches apart within the row. Rows should be 24 to 30 inches apart.