AMES, Iowa -- Amaryllis are popular flowering bulbs that are forced indoors for their large, spectacular blooms during the winter months. The trumpet-shaped flowers can be as large as 8 to 10 inches across. Flower colors include red, pink, orange, salmon, white and bicolors. In this Yard and Garden entry from Iowa State University Extension and Outreach, horticulture specialist Richard Jauron explains how amaryllis should be handled in the fall.

My amaryllis has been outdoors all summer. When should I bring it indoors and how do I get it to bloom?

Bring the amaryllis indoors in late September (before the first frost or freeze in fall). In order to bloom, amaryllis bulbs must be exposed to temperatures of 50 to 55 degrees Fahrenheit for a minimum of 8 to 10 weeks. This can be accomplished by inducing the plant to go dormant and then storing the dormant bulb at a temperature of 50 to 55 F. 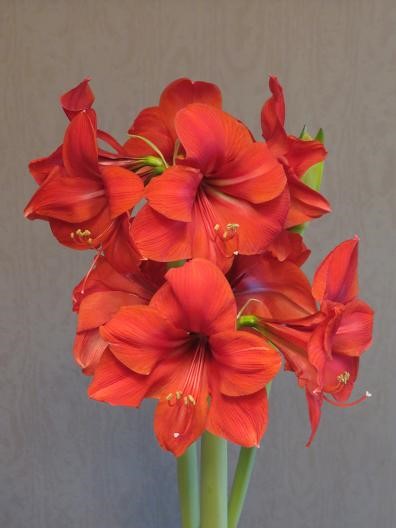 To induce dormancy, place the amaryllis in a cool, semi-dark location when the plant is brought indoors in late September. Withhold water. Cut off the foliage when the leaves turn brown. Then place the dormant bulb in a 50 to 55 F location for at least eight to 10 weeks. After the cool requirement has been met, start the growth cycle again by watering the bulb and placing it in a well-lit, 70 to 75 F location. Keep the potting soil moist, but not wet, until growth appears. The other option is to place the plant in a well-lit, 50 to 55 F location in late September. Maintain the amaryllis as a green plant from fall to mid-winter. After the cool requirement has been met, move the plant to a warmer (70 to 75 F) location.

How do you force an amaryllis bulb indoors?

When planting an amaryllis bulb, select a pot that is approximately 1 to 2 inches wider than the diameter of the bulb. The container may be clay, ceramic or plastic, but should have drainage holes in the bottom. Plant the bulb in a well-drained potting mix. Place a small amount of the potting mix in the bottom of the pot. Center the bulb in the middle of the pot. Then add additional potting soil, firming it around the roots and bulb. When finished potting, the upper one-half of the bulb should remain above the soil surface. Also, leave about one inch between the soil surface and the pot’s rim. Then water thoroughly and place in a warm (70 to 75 F) location.

When the amaryllis begins to bloom, move the plant to a slightly cooler (65 to 70 F) location that does not receive direct sun to prolong the life of the flowers.

When should I pot up an amaryllis bulb in order to have it in bloom at Christmas?