Mothers often remind children not to play with their food, but kids and houseplant enthusiasts may find it interesting and fun to start plants from the seeds and leaves of fruit. ISU Extension horticulturists tell how to start plants from pineapple tops and seeds from grapefruits and avocados.

How do you root the top of a pineapple?

When the pineapple has developed a good root system, carefully remove it from the rooting medium. Plant the rooted pineapple in a light, well-drained potting mix. Water well. Then place the plant in bright, indirect light for three to four weeks.

After three to four weeks, the plant can be placed in a sunny window. Keep the potting soil moist with regular watering. Using a soluble houseplant fertilizer, fertilize the pineapple once or twice a month in spring and summer. Fertilization usually isn’t necessary in fall and winter. The plant can go outdoors in late May, but must come back indoors before the first fall frost. 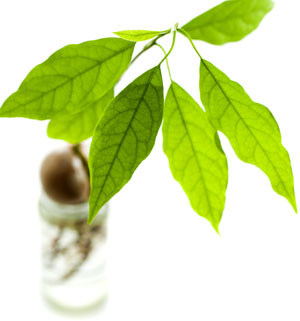 How do you sprout an avocado seed?

To sprout the seed, remove it from the center of the fruit and wash in water. For propagation purposes, the broad end of the seed is regarded as the bottom. The pointed end is the top. Insert three or four toothpicks into the sides of the seed. They should be placed about halfway up the seed. Then suspend the seed over a glass of water. The bottom one-fourth of the seed should rest in water. The seed should sprout within a few weeks. During this time, periodically add water to maintain the initial water level. If the seed doesn’t sprout within two months, discard it and begin another. The roots are usually the first to emerge from the seed. The stem appears later. Pot the seedling when the root system has become well developed; the roots are approximately 2 to 3 inches long.

Remove the toothpicks and plant into a 6- to 8-inch-diameter pot using a commercial potting mix. Position the seed in the center of the pot. The top of the seed should be level with the soil surface. After potting, water thoroughly, then place the plant in a brightly lit location. A site near an east or west window is ideal. Water the plant on a regular basis. Keep the potting soil moist, but not wet. To encourage branching, pinch out the growing point when the avocado seedling is approximately 12 inches tall. Fertilize once or twice a month in spring and summer with a soluble houseplant fertilizer.

Can I germinate the seeds from a grapefruit?

Seeds of grapefruit, oranges and lemons can be germinated indoors. After removing the seeds from the fruits, plant the seeds in a pot containing potting soil. Plant the seeds about 1 inch deep. After planting, moisten the potting soil. Keep the potting soil moist until the seeds germinate. Germination may occur within two to three weeks or take as long as six to eight weeks. After the seedlings emerge, place the plants in a sunny window. Grapefruit, orange and lemon trees can be grown as houseplants for a few years. Eventually, however, they get too big for indoors and will need to be discarded.  Plants grown from seeds seldom produce fruit indoors.

More opportunities for youth to explore their world are available through Iowa 4-H.