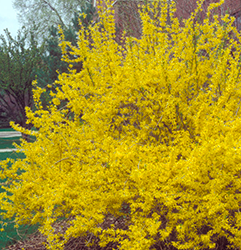 AMES, Iowa – Iowa gardeners can have an early breath of spring by forcing branches of spring flowering trees and shrubs into bloom. Forcing spring bloomers is an easy task. The hardest part is probably getting yourself outside in the cold, snowy weather. Iowa State University Extension and Outreach horticulturists offer tips on forcing blooms indoors. For more information, contact the ISU Hortline at 515-294-3108 or hortline@iastate.edu.

Which tree and shrub branches can be forced indoors?

Forcing the branches of spring-flowering trees and shrubs indoors is an excellent way to brighten the last few weeks of winter. Branches of forsythias, pussy willows, serviceberries, crabapples, magnolias, redbuds and most fruit trees can be successfully forced indoors.

When can I collect branches to force indoors?

Forcing can be done as soon as the buds begin to swell in late winter. Forsythia and pussy willow can be forced as early as late February. It’s best to wait until March for more difficult-to-force ornamentals, such as crabapples, magnolias and redbuds.

How do you force branches of spring-flowering trees and shrubs indoors?

Select branches containing round, plump buds. (Narrow, pointed buds are usually leaf buds. Flower buds are generally larger and have a more rounded shape.) Make clean, slanting cuts 1 to 2 feet from the tips of branches with a sharp pruning shears. Selectively remove branches that won’t harm the appearance or shape of the plant. If pruning fruit trees in late winter, gather some of the pruned material for forcing indoors. If possible, collect branches when temperatures are above 32 degrees Fahrenheit. If the plant material is frozen when collected, submerge the branches in a tub or pail of water for a few hours.

Later, set the branches in a tall container of water and place in a dimly lit, cool (60 to 65 F) location. Spray or mist the branches two or three times a day to prevent the buds from drying out. Also change the water in the container daily during the forcing period. Daily changes of water inhibit the growth of bacteria and fungi that could interfere with the absorption of water by the branches. When the flower buds begin to open, move the branches into a bright room. Keep the flowering branches out of direct sunlight and in a cool location to prolong the bloom period.

How long does it take to force branches into bloom?

The time period required to force branches into bloom depends upon the plant species and collection date. Forsythia and pussy willow generally take only one to three weeks to force. Apple and crabapple branches may take two to four weeks. The forcing period for magnolias is three to five weeks. The closer it is to the plant’s normal outdoor flowering period, the less time it takes to force the cut branches indoors.