AMES, Iowa – Recommendations for when to divide irises depend on the species. Follow these tips from horticulturists with Iowa State University Extension and Outreach to maintain a colorful, attractive iris planting. To have additional questions answered, contact Hortline at hortline@iastate.edu or call 515-294-3108. 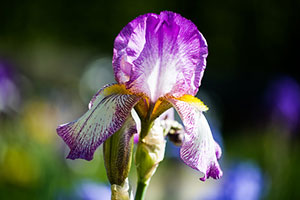 When should bearded irises be divided?

Bearded irises should be divided every three to five years, as the plants quickly become overcrowded and don’t bloom well. July or August is the best time to dig, divide and transplant bearded irises.

How do you divide bearded irises?

Bearded irises grow from thick, underground stems called rhizomes. In July or August, carefully dig up the iris clumps with a spade. Cut back the leaves to one-third their original height. Wash the soil from the rhizomes and roots with a steady stream of water. Then cut the rhizomes apart with a sharp knife. Each division should have a fan of leaves, a healthy rhizome and several large roots. Discard all diseased or insect damaged rhizomes.

Bearded irises perform best in fertile, well-drained soils and full sun. In clay soils, incorporate compost or sphagnum peat moss into the soil prior to planting. When planting bearded irises, dig a hole large enough to accommodate the rhizome and roots. Build a mound in the center of the hole. Place a rhizome on top of the mound and spread the roots in the surrounding trench. Then cover with soil. When planted, the rhizome should be just below the soil surface. Finally, water each plant thoroughly.

To obtain a good flower display, plant at least three rhizomes of one cultivar in a group. Space the rhizomes 12 to 24 inches apart.

When should Siberian irises be divided?

How do you divide Siberian irises?

When dividing Siberian irises in early spring, dig up the entire clump when new growth has just begun to appear. Divide the clump into sections with a soil knife or spade. Each section should have several growing points and a good root system. Replant immediately. Siberian irises perform best in moist, well-drained soils in full sun. When dividing plants in late summer (August), dig up the entire clump, cut back the foliage to 6 to 8 inches and divide the clump into sections with each division containing several fans of leaves and a good root system. Promptly replant the divisions.