AMES, Iowa -- Diagnosing problems in the perennial garden can be challenging. When disease issues are observed on perennials, the first step is to evaluate the growing conditions. For example, if the site is too wet or too shady, this can promote disease problems. Horticulturists with Iowa State University Extension and Outreach answer frequently asked questions about the diseases commonly found in Iowa perennial gardens.

How can I control powdery mildew on my garden phlox?

Powdery mildew is caused by a number of different fungus species and is a common disease of garden phlox (Phlox paniculata) and other perennials such as bee balm, asters, peony, mums and dahlias. The fungal disease produces a grayish-white coating or “dusting” on the leaves starting on lower leaves and progressing upward. Infected leaves eventually turn yellow and then brown. Powdery mildew is most commonly found on plants growing in shady areas and in crowded plantings with poor air circulation. Optimal conditions for powdery mildew are cool nights followed by warm days. 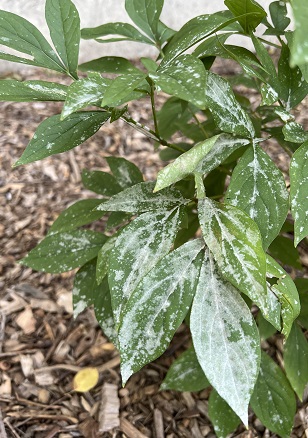 Cultural practices can reduce the severity of powdery mildew. The fungal pathogens that cause powdery mildew can survive the winter. Cutting off and removing diseased plant debris in fall can reduce the amount of pathogen present in the garden next year. Plants growing in shady locations should be moved to a sunny site. In overcrowded plantings, improve air circulation by digging and dividing perennials. Planting resistant varieties also minimizes problems with this disease in species that are prone to becoming infected.

Fungicides are rarely warranted for home gardens, but if cultural practices do not provide enough control, they can be used. To be effective, fungicides should be applied according to label directions at the first sign of the disease and repeated on a regular basis. These fungicides are mainly protective, not curative. Fungicides available for the home garden to treat powdery mildew include horticultural oils, neem oil and products that contain chlorothalonil or sulfur.

How do I manage hollyhock rust?

Hollyhock rust is caused by the fungus Puccinia malvacearum. The undersides of infected leaves show raised brown or brownish-red spots about the size of a pinhead and the upper leaf surface has small yellow spots. Symptoms typically start on lower leaves and the disease progresses to stems and upper leaves over the summer. Infected leaves eventually turn brown, wilt and die. Wet conditions promote rust fungus on hollyhock (Alcea rosea). Other perennials, such as daylily, iris and mums, can also get rust disease, but the disease is host-specific infecting only specific species or groups of closely related species.

To manage rust disease, remove and destroy infected leaves when they are first observed. After flowering, cut down and remove plants to help remove the fungus from the area. Control weeds in the garden, especially common mallow (Malva) as this weed is also susceptible to hollyhock rust and can help spread the disease to hollyhocks. In most situations, these good gardening practices alone will not control rust completely. If desired, fungicide applications can be used for additional disease management. Fungicides, such as those with the active ingredient Myclobutanil, Azoxystrobin, Chlorothalonil or Thiophanate methyl, should be applied according to label directions when symptoms are first observed and reapplied approximately every seven to 10 days.

What do I do with my purple coneflower infected with aster yellows?

Aster yellows is a disease that can cause many bizarre symptoms on coneflower (Echinacea purpurea) and other perennials such as daisy, marigold, zinnia, snapdragon, mum, tomato, carrot and lettuce. Infected plants can have veins that turn pale, yellowing of new leaves, abnormally bushy growth, deformed flowers and stunting. On coneflowers, the most typical symptom is the replacement of flowers by tufts of small, green, deformed leaves. These symptoms can be more pronounced in hot weather and some plants may be infected and never show symptoms. 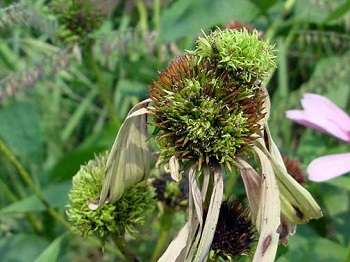 Aster yellows is caused by a microorganism called a phytoplasma, which is similar to a bacterium. The phytoplasma is carried from plant to plant by aster leafhoppers, which feed on the sap of the plants.

No treatment is available to save a plant infected with aster yellows. This disease is best managed by removing infected plants from the garden and destroying them to minimize spread. Management of the insect vector is not usually feasible in a home garden. Always inspect new plants for symptoms before you purchase, propagate or plant them in the garden.

How do I control petiole crown rot on my hostas?

Petiole crown rot (also called southern blight) is a soil-borne disease of hosta (Hosta) caused by the fungus Sclerotium rolfsii. This fungus has a very wide host range, including phlox, mum, windflower and daylily, so it can be a problem on many garden plants. Disease symptoms on hosta start as marginal yellowing and browning on the lower leaves first. A soft, brown, mushy decay may be seen at the base of the petiole sometimes accompanied by white fungal threads. As the disease progresses the leaves discolor and wilt. Eventually, the base of the petioles rot away and the leaves collapse and lay flat on the ground. Collapsed leaves pull easily from the crown of the plant.

Once plants become infected there is little that can be done to cure them of petiole crown rot. However, several cultural techniques can be used in combination to slow or stop the spread of the disease. Dig and destroy any plants showing symptoms (do not compost). Carefully inspect plants before planting or transplanting for symptoms of petiole crown rot to prevent the disease from entering the garden. Thoroughly wash soil from all tools used in infested soil. Replant with species not susceptible to petiole crown rot or remove the surrounding soil to a depth of 6-8 inches and replace it with non-contaminated soil. While some fungicides are available and labeled for petiole crown rot, control with fungicides has limited success.