Yard and Garden: Caring for Peonies

AMES, Iowa – The garden peony is a popular, long-lived perennial that provides abundant flowers in the spring and attractive foliage throughout the growing session. If given a good site and the right care, an established peony will flower for many years.

Horticulturists with Iowa State University Extension and Outreach provide helpful instructions on how to care for peonies all throughout the year. 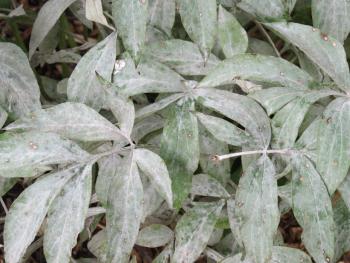 There are large, brown spots on my peony leaves. What should I do?

Peony leaf blotch is probably responsible for the large, brown spots. Peony leaf blotch is caused by the fungus Cladosporium paeoniae. The disease is also known as red spot or measles. Typical symptoms include glossy purple to brown spots or blotches on the upper surfaces of the leaves. The disease may cause slight distortion of the leaves as they continue to grow. Leaf symptoms are sometimes most apparent on the edges of older leaves. On stems, symptoms appear as long, reddish brown streaks.

Peony leaf blotch is best managed through sanitation. The fungus survives the winter in infected plant debris. Diseased plant material should be removed in fall. Cut off the stems at ground level. Remove the plant debris from the area and destroy it. Proper spacing and watering can help to minimize the severity of the disease. Space peonies three to four feet apart and when watering is necessary, avoid wetting the peony foliage. Fungicides can be used as a supplement to sanitation and good cultural practices.

My peonies appear to be covered with a white, powdery substance. What is it?

The white, powdery material on the peony foliage is powdery mildew. Powdery mildew is a fungal disease.  Powdery mildew occurs on a large number of plants like: peonies, lilacs, viburnums, roses, garden phlox, bee balm, turfgrass and many others. Fortunately, powdery mildew seldom causes serious harm to plants. The damage is mainly aesthetic.

In spring, some of the flower buds on my peonies turn brown and fail to open. Why?

The browning of the peony buds is likely due to botrytis blight. Botrytis blight is a common fungal disease of peonies. The fungus Botrytis paeoniae attacks stems, leaves and flower buds. It is most common in cool, rainy weather.

Botrytis fungi survive in debris left in the garden over winter. In spring, remove withered flower buds and spent flowers. In fall, cut off the peony stalks at ground level. Remove the plant debris from the garden and destroy it. If the peonies are growing in partial shade, move the plants to a sunnier location.

To have additional questions answered, contact ISU Hortline at 515-294-3108 or at hotline@iastate.edu.