AMES, Iowa --- Bell peppers are the large, blocky, thick, sweet peppers belonging to the species Capsicum annuum. The three- to four-lobed fruit taper slightly at the bottom and depending on the cultivar are red, yellow, orange or other colors at maturity. They are a great source of vitamin C. 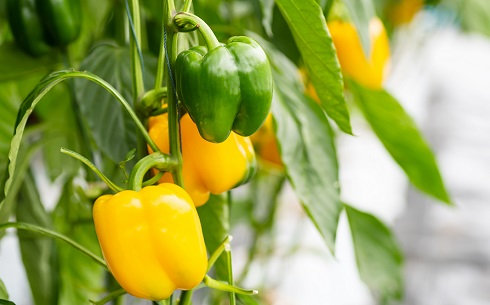 Horticulturists with Iowa State University Extension and Outreach explain problems that gardeners may encounter in a home planting of peppers.

My bell peppers are flowering, but not setting fruit.  Why?

Why are brown spots developing on the bottoms of several of my bell peppers?

The brown spots on the peppers are likely due to blossom end rot. Blossom end rot is caused by a calcium deficiency in the developing fruit. Fluctuating soil moisture levels due to drought or inconsistent watering practices, high nitrogen fertilization and root pruning during cultivation are factors that contribute to blossom end rot. To reduce the incidence of blossom end rot, water plants once a week during dry weather to maintain uniform soil moisture levels, control weeds with shallow cultivation or mulching, and apply only small amounts of nitrogen to the garden.  There is no need to apply calcium to the soil, as most garden soils contain adequate levels of calcium. Blossom end rot may also occur on tomatoes, eggplant, watermelon, cucumber and summer squash.

Light colored areas have developed on the sides of several fruit on my pepper plants.  Why?

The heat of the sun has likely burnt the side of the fruit exposed to the sun. This type of damage is referred to as sunscald. Initially, a soft, light-colored area develops on the fruit. Eventually the area dries, becoming white and paper-like in appearance. Sunscald typically occurs in hot, sunny weather. The occurrence of sunscald can be reduced by controlling leaf diseases that defoliate plants, lightly fertilizing plants to promote leafy growth and growing plants in staggered, double rows.