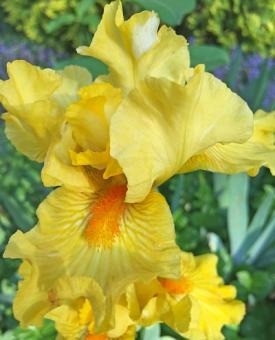 My bearded irises are no longer blooming well. Why?

Bearded irises should be divided every three to five years as the plants quickly become overcrowded and don’t bloom well. July or August is the best time to dig, divide and transplant bearded irises.

Lack of sunlight could be another possible reason for a lack of flowers. Bearded irises bloom best in full sun. (Plants need at least six hours of direct sun per day for best flowering.) Plants in partial shade may not bloom well and should be transplanted to a sunny site.

How deep should I plant bearded irises?

When planting bearded irises, dig a hole large enough to accommodate the rhizome and roots. Build a mound in the center of the hole. Place the rhizome on top of the mound and spread the roots in the surrounding trench. Then cover with soil. When planted, the rhizome should be just below the soil surface.

How can I control the iris borer?

The iris borer is a serious pest of bearded irises. The mature stage of the iris borer is a grayish moth that emerges in late summer. Female moths lay eggs on iris foliage and other nearby plants in late summer/early fall. The eggs hatch the following spring. The small larvae (caterpillars) bore their way into the iris foliage and feed on leaf tissue. Over time, the larvae tunnel down through the leaves and into the rhizomes. The caterpillars continue to feed inside the rhizomes and eventually destroy much of them. When fully grown, the larvae move into the soil and pupate.

Iris borers can be controlled by sanitation and the timely application of insecticides. Remove and destroy dead iris foliage in late fall after frost or in early spring. This will eliminate many of the iris borer eggs. Watch iris foliage in summer for brown leaf tips or dying leaves. When symptoms of borer infestation are noticed, dig and check rhizomes and discard infested rhizomes.

If iris borers have been a problem in the past, an insecticide can be applied in spring when the new shoots are 4 to 6 inches tall to reduce the infestation by killing tiny iris borer larvae before they bore into the iris foliage. Products that contain acephate, permethrin or spinosad should be effective. As always, carefully read and follow label directions when using pesticides.

Beneficial nematodes that infect and kill insects can be applied as soil drenches in June or early July when leaves are fully expanded but before flowering to reduce the number of iris borer caterpillars. Repeat the treatment approximately one week later. Microscopic, beneficial nematodes, called Heterorhabditis or Steinernema, are available online or at your local garden center. Do not purchase nematodes after the expiration date on the package. The soil must be moist for nematodes to be effective. Drench the nematodes into the soil around the plants during rain or water immediately before and after treatment. Nematodes are not always effective but generally reduce the number of iris borers.

When and how do I divide bearded irises?

While bearded irises are easy-to-grow perennials, they need to be divided every three to five years. If not divided, plants become overcrowded and flower production decreases. Crowded plants are also more prone to disease problems. In Iowa, July or August is the best time to dig, divide and transplant bearded irises.

Bearded irises grow from thick, underground stems called rhizomes. Carefully dig up the iris clumps with a spade. Cut back the leaves to one-third their original height. Wash the soil from the rhizomes and roots with a steady stream of water. Then cut the rhizomes apart with a sharp knife. Each division should have a fan of leaves, a healthy rhizome and several large roots. Discard all diseased or insect damaged rhizomes.

Bearded irises perform best in fertile, well-drained soils and full sun. In clay soils, incorporate compost, peat or well-rotted manure into the soil prior to planting. When planting bearded irises, dig a hole large enough to accommodate the rhizome and roots. Build a mound in the center of the hole. Place a rhizome on top of the mound and spread the roots in the surrounding trench. Then cover with soil. When planted, the rhizome should be just below the soil surface. Finally, water each plant thoroughly.

To obtain a good flower display, plant at least three rhizomes of one variety in a group. Space the rhizomes 12 to 24 inches apart.

Category:
Yard and Garden
About the Authors:
Associate Professor in Horticulture

Extension Entomologist and Professor in Entomology