Yard and Garden: Apples with Blemishes 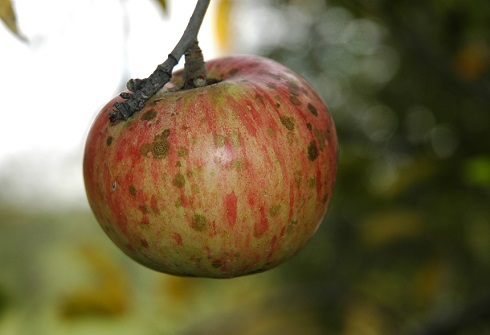 AMES, Iowa – Apple trees are a treat in a home garden, but they are susceptible to a variety of diseases. One of the most common problems of apples in Iowa begins to show up about this time of year – sooty blotch and flyspeck fungi. Horticulturists with Iowa State University Extension and Outreach identify several causes of apple blemishes and how to reduce their presence. To have more questions answered, contact Hortline at hortline@iastate.edu or call 515-294-3108.

What are the black spots and blotches on my apples?

The problem may be sooty blotch and flyspeck. Sooty blotch and flyspeck are regarded as a complex of several different fungi that often occur together on apples. Sooty blotch appears as dull black, blotches or smudges on the surface of the apple. Flyspeck produces clusters of shiny, round, black dots. Individual dots are about the size of a pinhead. Environmental conditions that favor disease development are moderate temperatures and an extended wet period in late summer or early fall. 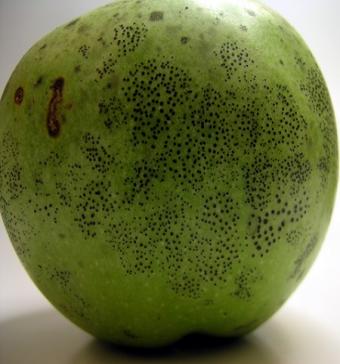 Sooty blotch and flyspeck live on the surface of the fruit. The damage is mainly cosmetic. The apples are still safe to eat. They are just not very attractive.

If control measures fail, sooty blotch and flyspeck can be removed with vigorous rubbing.

There are brown streaks in my apples. What produced them and how can they be prevented?

The apple maggot is a type of fruit fly. Female apple maggot flies insert eggs beneath the skin of fruit from about mid-June until shortly before harvest. The punctures produce small holes that later appear as blemishes on the fruit. Upon egg hatch, the larvae tunnel through the flesh of the apple producing the distinctive brown streaks.

Control of apple maggots in home gardens is difficult. Picking up and destroying apple maggot infested apples that have fallen to the ground helps to a limited degree. Placing apple maggot traps (red spheres coated with a sticky substance) in apple trees may provide satisfactory levels of control. Insecticides are the most commonly used method of controlling apple maggots in commercial and home orchards. The effectiveness of insecticide sprays in home orchards is often limited due to poor spraying techniques, rainy weather and other factors. Substantial damage may still occur despite spraying.