Yard and Garden: All about Raspberries

How do the growth and fruiting characteristics of raspberries differ? 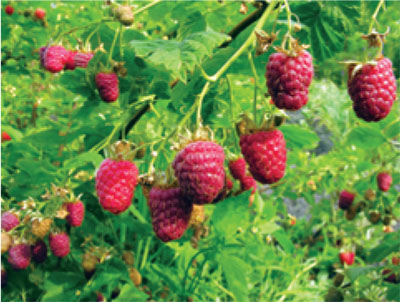 Raspberries have unique growth and fruiting characteristics. The raspberry plant’s roots and crown are perennial, while the canes (stems) are biennial. A raspberry plant survives and produces fruit for many years. However, individual canes live only two growing seasons and then die.

The shoots of purple, black and summer-bearing red raspberries are strictly vegetative during the first growing season. The following year, these same canes flower, produce fruit and then die.

The growth and fruiting characteristics of fall-bearing red raspberries differ from other types. Fall-bearing red raspberries naturally produce two crops. The first crop is produced in late summer or early fall at the tips of the current season’s growth. The following year, the lower portions of the same canes produce a summer crop. After the second crop, the canes die.

The growth and fruiting characteristics of raspberries are important as they affect pruning procedures and other cultural practices.

What is the proper way to prune summer-bearing red raspberries in late winter/early spring?

In March or early April, remove all weak, diseased and damaged canes at ground level. Leave the most vigorous canes, those approximately one-fourth inch in diameter when measured 30 inches above the ground. After thinning, remaining canes should be spaced about 6 inches apart.

Also, prune out the tips of the canes that have died due to winter injury. Cut back to live tissue. If the canes have suffered little winter dieback, remove the top one-fourth of the canes. Cane-tip removal or “heading-back” prevents the canes from becoming top heavy and bending over under the weight of the crop.

What is the proper way to prune fall-bearing red raspberries in late winter/early spring?

One pruning option is to prune out all weak, diseased and damaged canes at ground level. Leave the largest, most vigorous canes. Cut back the tips of the canes that remain. Remove approximately the upper one-third of the canes. This pruning option provides two crops during the year.

The second option is to prune all canes back to the ground in late winter/early spring. This pruning option produces a single crop in late summer or early fall. (The summer crop is eliminated.) While only one crop is produced, total crop yield is actually larger than the two-crop system.

Shoots growing beyond the 1- to 2-foot-wide hedgerow should be destroyed using a rototiller or spade.

What is the proper way to prune black and purple raspberries in late winter/early spring?

In March or early April, remove all small, weak canes, leaving only four or five of the largest, most vigorous canes per clump or plant. Cut back the lateral (side) branches to 12 inches in length for black raspberries and 18 inches for purple raspberries.