Workshops to Discuss What Dairy Needs to Know about Contagious Disease

AMES, Iowa – Dairy producers and the industry should prepare in advance for the possibility of a contagious disease outbreak, such as foot-and-mouth disease.

On Jan. 27 and Feb. 11, the Iowa Department of Agriculture and Land Stewardship, along with Iowa State University, will host two one-day workshops for dairy producers, processors, veterinarians, extension employees, emergency responders and others. 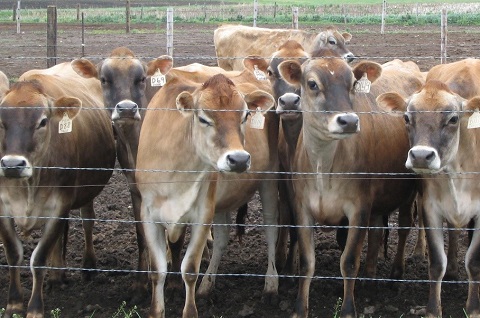 The free workshops will focus on how to prepare for a foot-and-mouth disease outbreak and steps that can be taken to protect dairies from foreign animal diseases and diseases already found in the United States.

Danelle Bickett-Weddle, associate director of the Center for Food Security and Public Health at Iowa State University, said the goal is to educate people about prevention, and what they need to know if one of these highly contagious diseases is found.

“Farmers will hear how to protect their animals, what to do if this disease is diagnosed, what a ‘movement standstill’ means, and what the farm needs to do to request a movement permit,” Bickett-Weddle said.

A movement standstill could potentially limit the movement of animals, feed and milk, and would be issued by IDALS or the United States Department of Agriculture.

Bickett-Weddle said foot-and-mouth disease was eradicated from the U.S. in 1929 but is still present in more than two-thirds of the countries around the world.

The workshops include question and answer time, allowing dairy farmers to voice their concerns and provide feedback.

During her portion of the program, Bickett-Weddle will review the resources available from Iowa State University. She said some of the biosecurity measures producers can take are to limit the contact their animals have with visitors, new animals and other exposures.

“Think of your farm as a castle and do the things you need to do in order to protect it,” she said.

One workshop will be offered Jan. 27 in Sioux Center, Iowa, at Terrace View. The address is 230 St., Andrews Way, Sioux Center.

The same workshop will also be offered Feb. 11, in Calmar, at the Northeast Iowa Dairy Foundation, 1527 Highway 150 South, Calmar.

A free lunch will be provided at each workshop and pre-registration is encouraged. Check-in starts at 8:15 a.m., with workshops ending at 3 p.m.

Registration must be made through IDALS. Register by emailing fad@IowaAgriculture.gov, or calling 515-281-5305.

Prior to the workshop, attendees are encouraged to view the Midwest Dairy Foot-and-Mouth Disease Webinar found online.

Category:
Livestock
About the Authors:
Center for Food Security and Public Health