Women Landowners Are the Focus of New Outreach Project 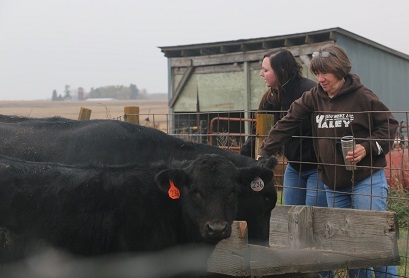 AMES, Iowa – Owning nearly half of the farmland in Iowa, women landowners play an influential role in decisions that impact agriculture and natural resources.

To better understand this demographic, a team of specialists with Iowa State University Extension and Outreach is beginning a three-year project to study the needs, challenges and opportunities of women landowners.

The project is called “Enhancing Conservation, Access and Generational Transition of Iowa Farmland through Women Landowners” and is being funded through a $300,000 grant by the United States Department of Agriculture’s National Institute of Food and Agriculture.

According to the 2017 Iowa Farmland Ownership and Tenure survey, 47% of all acres and 55% of all leased acres in Iowa were owned by women. In addition, most owners were over the age of 65 and 13% of female farmland owners in Iowa were over 80.

Madeline Schultz, program manager for the farm management team’s women in ag program with ISU Extension and Outreach and the project’s lead, said the disconnect between ownership and operator can sometimes lead to a disconnect with land-based decision making, whether that’s with leasing, conservation, farmland transition or a combination.

Her goal with the project is to bring women landowners together to help answer their questions.

“There’s a great opportunity for women to learn more about farmland ownership and we’re happy to be a part of this initiative,” said Schultz. “We also have some gaps in our knowledge of what women farmland owners need to help them manage their land, so we’re hoping to learn from them.”

Wendong Zhang, assistant professor and extension economist at Iowa State, said the goal is to empower women landowners to make well-informed decisions on the land they own.

Zhang is a team member for the project and a lead organizer of the 2017 farmland ownership survey. He said the group will work on research and extension focused on developing better farm management materials for women.

“We recognize that women landowners, especially senior landowners, are increasingly important in terms of land holdings,” said Zhang. “However, when you look at our extension programming, they are often missing.”

The first part of the project will consist of collecting more data and analytics about women farm ownership. From there, the team will assemble area meetings of women landowners and stakeholders, to discuss and gather concerns. Lastly, the team will hold online and face-to-face workshops to deliver information and resources that improve women’s knowledge of land ownership.

Specific goals include the use of equitable leases and other economic incentives to increase conservation and land access for beginning farmers, adoption of soil and water conservation practices, and the implementation of efficient plans to transition farmland to the next generation of Iowa farm owners.

A survey will be sent to known women landowners in June, and those interested in participating can contact Madeline Schultz at 515-294-0588 or schultz@iastate.edu. The grant portion of the project began Jan. 15, 2021, and will conclude Jan. 14, 2024.

Other team members include Jamie Benning, assistant director for agriculture and natural resources with ISU Extension and Outreach; Melissa O’ Rourke, farm management specialist with ISU Extension and Outreach; Lisa Scarbrough, communications specialist for the women in ag program at Iowa State; and Kristine Tidgren, director of the Center for Agricultural Law and Taxation at Iowa State and holder of the Leonard Dolezal Professorship in Agricultural Law.

About the Authors:
Program Manager Women in Ag