Wildlife: Prevent Birds from Flying into Windows and Doors

AMES, Iowa ― Spring is in the air, which also brings nesting time for Iowa’s songbirds. While many homeowners enjoy seeing and feeding the birds, it can be disconcerting for homeowners who have birds fly into glass doors or windows again and again. So are Iowa’s songbirds crazy, or is something else going on? 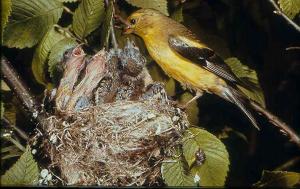 "I’ve received multiple questions from homeowners asking about this behavior, what is causing it and what can be done about it," said Rebecca Christoffel, Iowa State University Extension and Outreach wildlife specialist. "Most incidences of birds flying repeatedly at a glass door or window are simply issues of territory."

Christoffel said male songbirds who see their own reflection mistake it for an “interloper” invading their territory. Very few, if any, species are able to differentiate their own image in glass from that of another of their species ― the bird flies at the glass, often colliding with it, in an effort to drive off the “interloper” they see. Birds that commonly exhibit this behavior during the breeding season include American robins, cardinals, American goldfinches and some sparrow species.

“This seemingly erratic behavior will eventually subside once the bird is no longer in breeding mode,” Christoffel said. “However, with birds that raise multiple broods of young over the course of the spring and summer, it could be months before the animal stops.”

Christoffel said there are options available to homeowners to help alleviate this behavior by birds:

Do you have a wildlife, or other question? Use our Ask the Expert feature to get an answer.