AMES, Iowa – Do you ever notice the occasional small fly in the sink, or sometimes on the lighted screen of a laptop in the evening? Maybe you’ve wondered, “hmm, a fly, maybe I should do something about flies breeding in my house,” but then promptly went on with life and forgot about them. However, now that many people are working from home, things that were easily forgotten annoyances have suddenly become really big annoyances that must be solved immediately. So, if you are in the same boat, read on to get your questions answered about flies breeding in the house and what you can do about it. 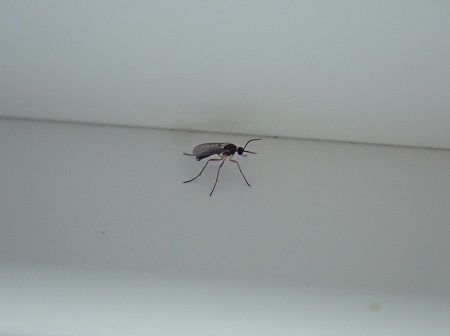 What does breeding indoors mean? In general, for insects, it means that adult insects are mating; the females are finding a good place to lay their eggs; the eggs are hatching into larvae that are finding something to eat and they grow. Once larvae are full grown they transform into pupa. The pupal stage is where the larvae transforms into the adult. Adult insects often have wings and fly around the house, so this is usually what we human inhabitants of the house notice.

How do you know insects were breeding in the house? Because winters in the Midwest are too cold outdoors for insects to be active and breed. Seeing live insects over many months indoors is a pretty good sign they are reproducing in the house.

How can you control insects breeding in the house?

The key is to find what the larvae are eating. It is no use trying to kill adult insects unless you can kill all females before they lay eggs (this is impossible). So, although the adults are irritating and what you actually see, you have to do some detective work to find out where the kids are hiding!

OK, how do you find out where the insect is breeding? The first step is to identify the insect, because then we will know what the kids (larvae) eat and therefore where to look. In my case, I identified my flies as fungus gnats. The most common place for larval fungus gnats is overwatered houseplants.

Where were the fungus gnats breeding in my house?

In an overwatered houseplant! I have kept all my houseplants in a seldom used bedroom with south facing windows. I so seldom water the plants (I do not have a green thumb) that I was doubting the gnats were originating from the houseplants. But yesterday I finally watered the plants for the first time in weeks and as soon as I poured water around the base of one of my plants, the flies started running all around the edge of the pot to escape the water.

Are you seeing flies everywhere, and are they breeding everywhere? Many people have been seeing flies all over the house for months, especially in sinks. However, insects often come to sinks and showers to drink water and are usually not breeding in them unless they are not used for weeks. Showers and sinks used every few days are not where flies will breed because the larvae get washed down the drain. Insects are attracted to light so they will come to lamps and laptop screens at night. They can also be found dead and alive at windows all around the house.  Winged insects do get around! So, it is possible they are breeding somewhere else, but not likely. Let’s focus first on the houseplant.

What can you do about fungus gnats in a houseplant?

Reduce watering and allow the soil to dry. Fungus gnat larvae look like small white worms with a shiny black head. These larvae feed on fungus and need moist conditions to survive. This will not be a quick solution, but over time will reduce the number of flies seen as the larvae dry out and die. Repotting with fresh soil can more quickly change the soil characteristics and eliminate the fungi growing on the overwatered soil. However, removing all the soil from around the roots can be disruptive and potentially harm the plant (normally when repotting we keep much of the soil around the roots and just loosen the dirt around the edge). Finally, discarding the plant will quickly eliminate the problem. Insecticides will not work and are not recommended for houseplant fungus gnat control.

What did I do about my fungus gnats?

I just took a lot of pictures of the flies to share with you! I am not too concerned about them as they won’t infest food or cause any damage, plus I am a bit more accepting of insects than most people. Once you know where they are coming from you can reduce how often you water that plant. I had not been checking soil moisture in my houseplants before watering and that plant has really wet soil.

It will be weeks before the insects are really active outside, so in the meantime, as an insect lover I will stop being annoyed by the flies and learn to enjoy my little colony of fungus gnats.

Original image: The most common place for larval fungus gnats is overwatered houseplants.