Vomitoxin Found across the Corn Belt

AMES, Iowa – High levels of deoxynivalenol (DON), a mycotoxin commonly known as vomitoxin, are being found in grain across the Corn Belt, including eastern Iowa. Contaminated corn is an issue especially in dried distillers grains and solubles (DDGS), according to Erin Bowers, mycotoxin sampling and analysis specialist with Iowa State University. 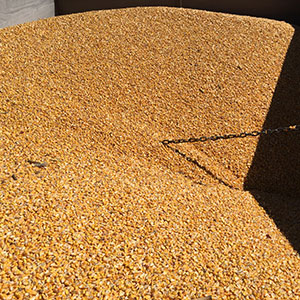 DDGS, commonly used in animals feed, is a by-product of ethanol production. Mycotoxins tend to concentrate in this by-product at three times the levels found in the original grain.

“This is problematic because we have a huge swine industry in Iowa, and swine are very sensitive to DON,” said Bowers. “When you feed DDGS contaminated at even 3 parts-per-million to swine in addition with other contaminated grains, you’re going to start seeing health and productivity issues.”

DON is produced by molds of the genus Fusarium, most commonly Fusarium graminearum. According to the Food and Drug Administration, advisory levels for livestock consumption of DON are as follows:

“In the eastern corn belt right now, we are seeing base corn levels around 1 part-per-million,” said Bowers. “As soon as you make DDGS out of them, you start pushing the boundaries of some feeding limits. Grain receiving locations should be testing for these levels or at least be aware that we are seeing higher levels this year. Having a good strategy for managing their grain supply and marketing it appropriately can increase its safe use.”

There are solutions to utilizing DON contaminated grain. Beef cattle are much more tolerant of this mycotoxin, and can be fed higher levels of contamination without seeing negative health or productivity effects. DON also can be blended, but steps should be taken to carefully and representatively test blended grain.

Other available modules address grain storage economics, food safety and animal nutrition, supply chain analysis and processing. The modules are free and can be accessed on the Extension Store.

The mission of the Iowa Grain Quality Initiative is to create knowledge and provide information that will improve the efficiency of traditional commodity grain markets and assist emerging market for user-specific grains. For more information, visit iowagrain.org.