A native of LeMars, Ten Napel most recently was an agronomist with Central Valley Ag Coop in Hinton. She graduated from Iowa State in 2017 with a bachelor’s degree in agronomy and seed science. 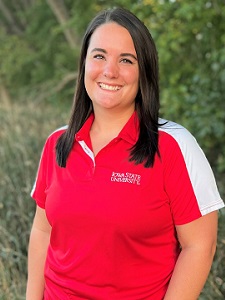 Ten Napel said she knew when she graduated that she wanted to return to northwest Iowa and work with farmers in her community. With the new position, she will help advise farmers in nine counties and looks forward to meeting new people across her region.

She credits her grandparents for introducing her to agriculture through their farm, which led Ten Napel and her three siblings to participate in 4-H and FFA. Her projects consisted of livestock, static exhibits and citizenship projects.

“We are really excited to have Leah join us and for her eagerness to serve as a field agronomist for northwest Iowa,” said Rebecca Vittetoe, field agronomist for ISU Extension and Outreach in southeast Iowa. “As a native from northwest Iowa and with her previous work experience in ag retail, Leah already has good relationships, and she’ll be able to continue to build relationships to help serve farmers and ag retailers across her region.”

Ten Napel is marred to Derek Ten Napel and the couple lives on an acreage they recently purchased from his grandparents. They raise sheep and also run a trucking business.

Leah Ten Napel started Sept. 12 and will be based at the ISU Extension and Outreach Plymouth County Office. She can be reached at lre@iastate.edu or 712-541-3493.