AMES, Iowa -- Spreading rumors, telling mean jokes and shoving are bullying behaviors that might be seen and heard on any school playground. Although bullying is a common part of childhood, it isn’t “normal.” It’s a serious problem that can limit the ability of children, both the bullies and their victims, to progress academically, socially and emotionally says Barbara Dunn Swanson, a human sciences specialist with Iowa State University Extension and Outreach. 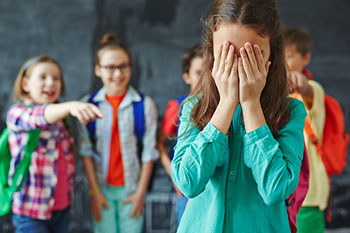 Educators today are more aware of bullying as a problem and have measures in place to help prevent and deal with it. But no matter how good these measures are, parents and other adults can teach children useful strategies to help them cope with bullying behavior, said Dunn Swanson, who specializes in family life issues.

Bullying is any kind of ongoing physical or verbal mistreatment that arises when there is unequal power between two or more people, such as a bigger child and a smaller child, or older children and younger children, Dunn Swanson said.

Bullying can include a wide range of behaviors – physical abuse as well as verbal abuse, such as teasing, humiliating, gossiping and excluding. Both boys and girls can bully or be bullied.

“The Centers for Disease Control calls bullying a form of youth violence. Youth who are bullied are at risk for substance abuse, academic problems, sleep difficulties and mental health issues,” Dunn Swanson said.

Victims of bullying may suffer from anxiety, fear and low self-esteem. They may avoid their peers, school and social activities where they may be exposed to teasing or bullying. In some cases, children may drop out of school to avoid being harassed or attacked, Dunn Swanson said.

“Children who bully may have school attendance and performance problems. They may become aggressive adults and may be more likely to become involved in criminal activities,” Dunn Swanson said.

Teasing and bullying cannot be totally prevented. However, parents can teach their children some simple strategies to empower them and help them cope with their feelings and bullying behavior, Dunn Swanson said. For example:

“Children can handle most types of teasing. However, if the teasing is repeated or occurs for a prolonged period of time, it becomes bullying and may call for an intervention by parents, teachers and caregivers. Children need adults who are attentive and able to respond,” Dunn Swanson said.