AMES, Iowa — Leadership at Iowa State University Research and Demonstration Farms has changed with the retirement of previous managers. 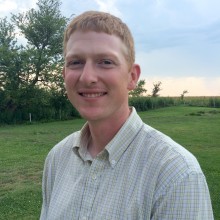 Evans started with Iowa State in 2013 after receiving his bachelor’s degree in agricultural studies from Iowa State. From 2011-2013 he worked at the McNay farm as a student intern and part-time employee.

Other staffing changes have occurred at the Muscatine Island Research and Demonstration Farm in Fruitland. Josh Michel, one of two ag specialists at the farm, became an area ISU Extension field agronomist earlier this month. The ag specialists replaced long time superintendent Vince Lawson who retired in 2017.

With Michel’s change, Dominic Snyder will be the sole full-time ag specialist at Muscatine Island, and will be the point of contact at the farm. Snyder earned a bachelor’s degree in 2017 in agricultural business with a minor in horticulture from Iowa State. He will continue to report to Myron Rees, superintendent of the Muscatine Island and the Southeast Research and Demonstration Farm near Crawfordsville, and work with Cody Schneider, the ag specialist at the Southeast farm.

The farms are outlying locations of the Iowa Sate University College of Agriculture and Life Sciences. The McNay Research Farm, established in 1956, focuses on beef cattle, forage, and cropping systems research applicable to south central Iowa. The Muscatine Island Research Farm, established in 1935, is a partnership with the Muscatine Island Research Farm Association and specializes in projects related to vegetable crops, irrigation and soybean diseases. Each location has soils and topography representative of the area.