AMES, Iowa – Anindita Das has been with the Refugee Alliance of Central Iowa for about 15 months, but her impact already is being felt in many important ways. RACI is a collaboration of service providers, government agencies, religious groups, nonprofit organizations and educational institutions that works to serve the needs of central Iowa’s refugee population. The organization now has a mission and a vision. There is improved coordination among the members of the collaborative.

Those efforts are being noticed in the community as well. Recently, the Community Foundation of Greater Des Moines gave the Alliance its Better Together Award, which recognizes nonprofit organizations, civic groups and individuals who are building social capital in the community. The award included $2,500 to be used toward advancing efforts to make Des Moines a more engaged and networked community.

“It was really special to get this award, and for a small collaborative, we are honored to be recognized in the community,” Das said. “We haven’t accomplished mountains, and in some sense are still taking baby steps, but since I started last year, we feel quite stable and people are aware of our presence. This is a huge accomplishment.” 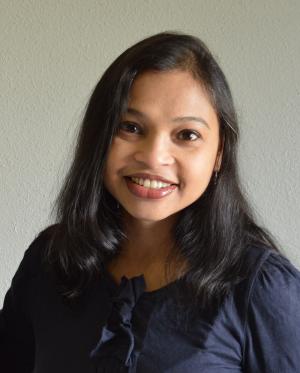 Das works as a refugee specialist and program coordinator for RACI, in partnership with Iowa State University Extension and Outreach’s Community and Economic Development program. ISU Extension and Outreach brings expertise in capacity and coalition building to the changing demographics of Iowa’s communities.

“Our mission is to make central Iowa a welcoming community for refugees,” she said. “Beyond the three-month period (where refugees are supported by the resettlement agencies following their arrival in the United States), they might not feel they have the ownership of the resources or the connections where they can reach out to get services. We want to make sure they know their needs will be met and they can feel a part of community and culture as much as any other person.”

The Alliance brings service providers together to create that community for refugees in central Iowa.

“That’s what we do,” she said. “All of the people collaborate and communicate together to provide a network and system for refugees. So they have the opportunity to reach their individual goals and prosper and participate in the cultural life of central Iowa.

“Being an immigrant myself, I know when you are new to a country, the initial three months are not enough to retain all the information to completely participate in the culture and community of a new country.”

Over the last 15 months, Das has helped RACI build a significant foundation to help refugees thrive.

“When I started, we had a group of enthusiastic members willing to form the mission or vision, all those things that make organizations unique with their values and goals,” she said. “We have worked very hard in the last 15 months, and have a well-defined mission and vision and evolving goals. We weren’t as structured previously. We have a website, a mission, a vision and events that relate to us. We’re building awareness, advocacy and providing a voice for this group.”

Das says that RACI creates needs assessments to help understand what refugees need for being successful in their new environments.

For example, the RACI housing group brought landlords, housing partners and service provider and refugees together in responding to the refugee housing needs in Des Moines. An online landlord engagement survey is being conducted to help articulate what assistance landlords need from service providers and what resources are necessary to foster better landlord-refugee housing relations.

“We want relational and collaborative communications and for one not to think of the other as a burden,” she said. “We hear many landlords say they want support in understanding refugees.”

In responding to this need the housing team is working to create a landlord educational outreach  program that will lead to a certification, which will be done in collaboration with landlords in the City of Des Moines.

“It’s not that we think they can or can’t understand them,” Das said, “but it’s what needs to be done to support landlords and have a better relationship with refugees. We bring different parties to the table and create a welcoming environment that is built on mutual trust.”

In addition, RACI just completed the World Refugee Day celebrations. Four events connected with World Refugee Day were held during the month of June that celebrated and supported refugees: an event at a Des Moines-area Barnes and Noble bookstore to do a photo exhibit of refugees; a cultural celebration where more than about 20 cultural groups and more than 500 people came together with food and vendors to share culinary expertise; a movie,“Warehoused”, was screened at the Sheslow Auditorium at Drake University to spotlight the plight of refugees in camps; and a soccer tournament, the “Cup of All Nations,” saw over 15 local area teams representing different countries and cultures of the world participate.

Planning also is underway for the second annual Refugee Summit, set for Oct. 6-7 at Mercy College in Des Moines in conjunction with the United Way of Central Iowa and community partners. Das said it will feature an advocacy panel of elected officials, and the first Somali-American Congresswoman, Minnesota’s Ms. Illhan Omar, is the keynote speaker for the event. The summit is unique in that the second day is dedicated for the refugee population, with interpreters provided so they can connect and communicate with service providers who’ll be on hand.

Das said that RACI is also providing interpretation and translation training for refugees who are already engaged in similar work around the community. She clarified that refugee members are often asked for such services, and feel comfortable doing so. Following up with the trainees after the two days training, she realized many of the refugees have been doing this work for several years now and are not aware that there are many responsibilities in undertaking such tasks. With this training, they feel much more confident in their job. They feel much more secured when they know that they also have rights, along with their responsibilities in doing interpretation/translation.

“You have to understand that language is a major barrier for majority of refugees,” Das said. “RACI seeks to provide for free or with a nominal fee, culturally-relevant education through training, presentations and other outreach mediums for the Limited English Proficient (LEP) refugees in the region. When you are new to a community, and if you’re not able to communicate — it’s like a disabled person who can’t enter a building with the resources inside. All the resources might be there, but if you don’t have access to the language it doesn’t help.”