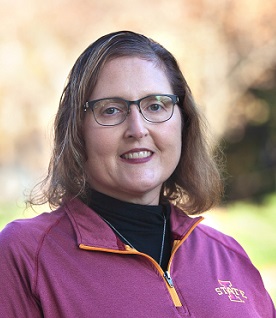 AMES, Iowa – The most important thing about any pesticide is to use it safely.

“If I can just get one farmer or one commercial applicator to take another look at that label and wear the protective equipment that they should, then I have made a difference,” said Pilcher, who started in her new role Aug. 1.

As manager of the Pesticide Safety Education program, she will oversee the training administered to private and commercial pesticide applicators across Iowa.

By partnering with the Iowa Department of Agriculture and Land Stewardship, the program provides applicators the required education for certification and re-certification, on a three-year cycle that covers pesticide laws and regulations, safety, application and new and emerging issues.

Pilcher took over for Kristine Schaefer, who retired in February 2021. Pilcher said the commercial programs have the ability to provide recent updates and answer questions concerning recent changes in the use of pesticides. There have been many changes during the past year. She looks forward to the continued relationship that applicators have with ISU Extension and Outreach.

Pilcher became interested in insects as a child, when her father showed her his 4-H insect collection.

She met her husband, Clint Pilcher, while they were both working in the Insectary at Colorado State University. Clint Pilcher earned his Ph.D. in entomology from Iowa State in 1999, and also has an extensive career in pest management.

Category:
Crops
About the Authors:
Manager of Pesticide Safety Education