Periodical Cicadas Will Emerge This Year, but Not in Iowa 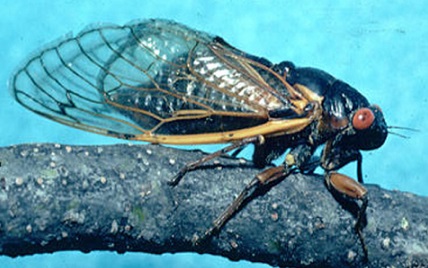 AMES, Iowa – Iowans who want to see or hear the emergence of the 17-year periodical cicada will need to go on a road trip.

While this fascinating, long-lived insect will indeed emerge this year, it will do so only in select parts of the Midwest and the east coast. The closest place for Iowans will be northern Indiana, according to Donald Lewis, professor and extension entomologist at Iowa State University.

Iowans will see a limited emergence in 2024, but the next widespread emergence in Iowa will not be until 2031. In addition to Indiana, the 17-year cicada will emerge in Ohio, Kentucky, Tennessee, Pennsylvania and some coastal states. A detailed map is available online, and the insect will only appear in forests that have been undisturbed for centuries.

Whether you get to see these cicadas in person or not, you can still learn about them through Iowa State University Extension and Outreach.

According to Lewis, four characteristics make these cicadas exceptional. The first is the 13 or 17-year life cycle. The life span of 17 years puts the periodical cicadas among the longest-lived insects in the world.

All but a few weeks of those 17 years are spent as a nymph, 18 to 24 inches deep in the soil of wooded and forested areas, feeding on sap from tree roots.

Equally impressive is how all the cicadas in an area emerge at once, in a highly synchronized fashion. The nymphs develop slowly and at different rates, but at the end of the 17 years, they have all developed fully and begin digging their way to the soil surface.

The nymphs surface during late May and June and climb up tree trunks, posts and poles. The outer shell of the nymph splits along the middle of the back, and the winged adults laboriously emerge over the course of about one hour.

Each adult may live for five or six weeks. During that time the males and females mate and the females lay the eggs that are the start of the next generation. Eggs are laid into the small twigs of trees and shrubs. This causes moderate twig dieback and some disfigurement ("flagging") of forest and woodland trees, but no long-term consequences. The eggs hatch after six to seven weeks and the newly hatched nymphs fall to the ground, burrow until they find a suitable tree root and begin the feeding.

Periodical cicadas are also known for the noise they make. The males "sing" with a loud buzzing or drumming sound from about 10 a.m. to mid-afternoon. The incessant buzzing sound is produced by two shell-like drums located along the sides of the abdomen.

Strong muscles vibrate the drum membranes several times per second. The resulting high-pitched, rapid clicks are resonated through air sacs to control sound volume and quality and the upward angles of the wings form a megaphone-like chamber that further controls the sound.  A recording of a periodical cicada chorus can be heard online at songofinsects.com.

Periodical cicadas can occur in numbers that stagger the imagination and repulse the squeamish. Populations can reach up to a million and a half cicadas per acre. That can mean as many as 40,000 cicadas per tree.

Periodical cicadas do not bite or sting, they do not feed on crops or garden plants, and they are not considered a house pest. The biggest nuisance is caused in the twigs of apple trees that are located near cicada-containing forests. The slits females make to lay eggs in the twigs can damage apple trees, if not protected.

Category:
Yard and Garden
About the Authors:
Extension Entomologist and Professor in Entomology