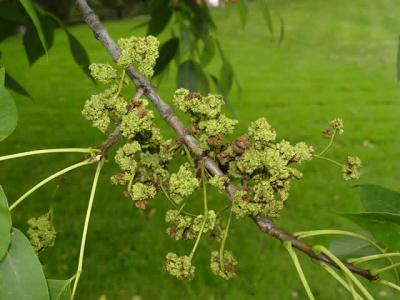 Galls can be caused by insects, mites, bacteria, fungi, nematodes and mechanical damage.

Iowa State University (ISU) Forestry Extension has received numerous questions about a strange and unsightly growth on ash trees. Homeowners are reporting green or brown clusters hanging from the trees that look like a cocklebur. These clusters are caused by an eriophyid mite, and the damage is commonly called the ash staminate flower gall.

Galls are abnormal growths or swellings of plant tissue that is damaged. Galls can be caused by insects, mites, bacteria, fungi, nematodes and mechanical damage. They are commonly found on leaves, twigs, branches and occasionally the main trunk of a tree. However, in this case the damage is done to the flower of the ash tree. Ash trees are dioecious, which simply means that the tree either has all male flowers (staminate) or all female flowers (pistillate). In this case, the mites are feeding on the tiny male flowers.

The mites are too small to be seen without the aid of a hand lens, but the damage they caused has been very noticeable this year particularly on white ash. The mites spend the winter under the flower buds and begin feeding and laying eggs in the developing flowers in spring. The ash tree, in response to the mites feeding, grows new malformed plant tissue (gall) around the mite. The galls in turn provide some protection for the mite against weather, predators and parasites.

The ash staminate flower galls remain on the tree for up to two years. The galls are green at first, and later become brown to black within the growing season. Research has shown that this particular gall does not harm the tree’s health or growth rate. In extreme conditions, the weight of the galls can cause smaller branches to strain from the weight. This problem is rare and typically affects young newly planted ash trees.

The next obvious question is why we are seeing so much damage this year?  The mild winters may have helped the mite population increase over the last several years, but there is more to this story. Many homeowners have elected to purchase and plant only seedless ash trees, which is simply a male ash tree. Planting the seedless selections has helped create more “homes” for the mites. After the fact, many homeowners have now decided they would prefer the temporary seeds to the slightly longer term galls.

The galls are usually an aesthetic problem and chemical control is not necessary and rarely works. Perhaps a cooler winter will help limit the future damage, but the best answer is to diversify the species of trees planted. Ash is one of the most overplanted trees in Iowa and has several decline problems. In addition, there is concern about damage being caused by an insect called the emerald ash borer in Michigan, Indiana and Ohio.

There is one high resolution photo available for use with this week's column:
ashflwrmite8406.jpg [2.32 MB]