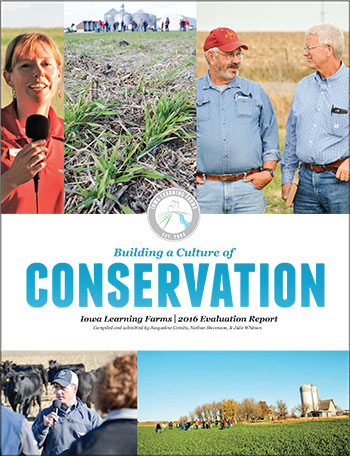 AMES, Iowa -- According to the newly released Iowa Learning Farms 2016 Field Day Evaluation Report, the number of Iowa cover crop acres grew by approximately 32 percent to 623,700 acres. While the positive growth with shrinking profit margins is encouraging, the rate of growth is 3 percent slower than the growth measured the year before, and still well below the goal of 12.5 million acres called for in Iowa’s Nutrient Reduction Strategy.

In January 2017, farmers and landowners who attended ILF field days were mailed an evaluation questionnaire to investigate whether they made changes to their farming practices. In a one-month period, 281 evaluations were returned for a 40 percent response rate.

Growth in cover crop acres came from both first time and experienced users. The majority of respondents (69 percent) started seeding cover crops at least three years ago and have an average of five years of experience with cover crops. Examining the percentage of their row crop acres seeded to cover crops, there was a steady increase corresponding to years of cover crop experience.

As experience with cover crops increased, concerns about yield impacts and implementation knowledge decreased. This is consistent with findings from the longest running on-farm cover crop research and demonstration project in the state of Iowa. After eight years, a properly managed cereal rye cover crop had little-to-no negative effect on corn and soybean yield and actually increased soybean yield in seven site-years and corn yield in two site-years.

Cost was identified as the biggest barrier to cover crop adoption for the third straight year. Cost share continued to be a driver as approximately 61 percent of cover crop farmers reported using cost share, representing 73 percent of the overall reported cover crops acres (up 3 percent from 2015). Cost share was used to plant 82 percent of the acres for farmers who reported cover crop usage for three years. As these cost share contracts expire in the coming years, Iowa could experience an even larger slowdown in cover crop adoption. While cost share can help lower the risk of adopting a new practice, it is not a sustainable tool in the long term to voluntarily meet Iowa’s Nutrient Reduction Strategy goals.