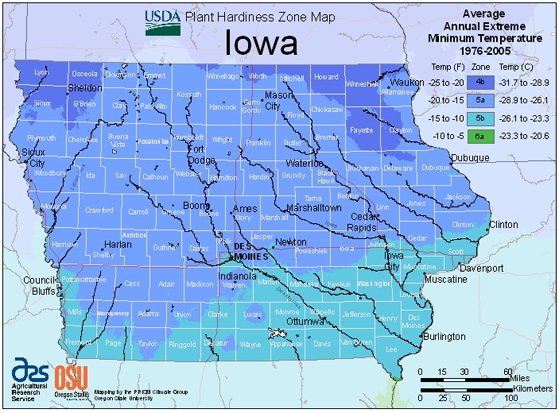 AMES, Iowa — Gardeners and researchers have a new, updated plant hardiness zone map to consider as they make plant selection decisions this year. The U.S. Department of Agriculture (USDA) released the new version of the map this week — the first update since 1990 — with much of Iowa now considered Zone 5.

Plant hardiness zone designations represent the average annual minimum temperatures at a given location. The new version has 13 zones, two more than the previous map, which were determined by data measured at weather stations during the 30-year period 1976-2005. Each zone is a 10-degree Fahrenheit band, further divided into A and B 5-degree Fahrenheit zones. Zone 5 has a -10 to -20 degree annual minimum average. Compared to the 1990 version, zone boundaries in the new edition of the map have shifted in many areas.

According the USDA, some of the changes in the zones are a result of new, more sophisticated methods for mapping zones between weather stations. These include algorithms that considered for the first time such factors as changes in elevation, nearness to large bodies of water, and position on the terrain, such as valley bottoms and ridge tops. Richard Jauron, ISU Extension horticulturist , encourages gardeners to consider the zone map as a guide and remember to factor in location details when making plant selections.

“It isn’t as simple as concluding that the same plants can be grown in Mason City and Ames just because both cities are located in Zone 5a,” Jauron said. “Mason City is often several degrees colder than Ames in winter. For example, Mason City has had below zero temperatures several times this winter, including -17 degrees Fahrenheit on Jan. 2; while the minimum temperature in Ames this winter has been -4 degrees.” Jauron said growers also need to consider the differences between rural and urban areas, low-lying areas near streams and hilltops, and other local factors that affect temperatures when making their plant selections.

Jauron said he would not encourage gardeners living north of Highway 20 to immediately plant large numbers of Zone 5 plants. “Over the next few years, gardeners in the northern one-third of the state may experiment with a few plants labeled as hardy in Zone 5a, but the most reliable choices for that part of the state are still Zone 4 plants,” he said.

The USDA map is addressing some of the issues pointed out by Jauron, by providing a Geographic Information System (GIS)-based interactive format of the map. Specifically designed to be Internet-friendly, the map website incorporates a "find your zone by ZIP code" function. The intent is to increase accuracy and detail. The new map — jointly developed by USDA's Agricultural Research Service (ARS) and Oregon State University's (OSU) PRISM Climate Group — is available online at www.planthardiness.ars.usda.gov. ARS is the chief intramural scientific research agency of USDA.