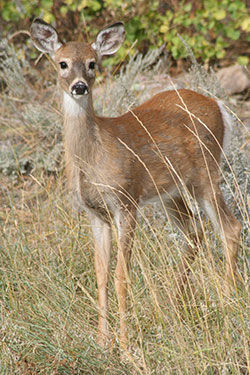 AMES, Iowa – Chronic wasting disease is a neurological disease that affects white-tailed deer and other members of the deer family found in North America like elk and moose. The disease is caused by an abnormally shaped class of proteins which cause holes in the brain, degraded neurological function and ultimately death.

While currently only found in a small pocket of Allamakee County in northeast Iowa among wild deer, Iowa State University Extension and Outreach encourages all hunters, landowners and farmers to stay vigilant throughout the state for signs of the disease to help monitor its distribution.

“Chronic wasting disease is a challenge because it is persistent in the environment and fatal,” said Adam Janke, assistant professor and extension wildlife specialist at Iowa State University. “However, many states have been dealing with the disease for some time and we can benefit from what they have learned about the disease and how it affects deer populations.”

Janke has authored a publication discussing CWD and also created a video with additional information about the disease.

The disease was discovered in Colorado in 1967 in captive mule deer and was not seen in the wild until 1981. In the last 35 years it has slowly spread throughout the United States and Canada. While it has been present in states bordering Iowa since as early as 2001 in South Dakota, CWD was not found inside Iowa until 2012 when it was detected in captive herds in three counties. The disease was not detected among wild deer until 2013. The Iowa Department of Natural Resources has tested more than 50,000 wild deer since 2002 with six deer testing positive, all in Allamakee County in far northeastern Iowa.

CWD is transmitted from sick to healthy deer through bodily fluid exchange. Indirect transmission of the disease through contaminated soil also is possible.

“The disease is spread in two major ways,” said Julie Blanchong, associate professor and wildlife disease ecologist at Iowa State. “One is through contact as deer in social groups interact with each other; when males fight during the rut or when there is nose-to-nose contact, the disease appears to be spread that way. The other way is through contact with an environment that might be contaminated with the proteins that causes CWD. These proteins are shed in saliva, feces and urine; these animals can be affected by contacting these infected materials."

To help stop the spread of the disease, take the following steps:

“There is no proven solution for controlling or getting rid of this disease from free-ranging deer, elk or moose,” said Blanchong. “Some of the recommendations are to minimize practices that cause deer to congregate because we know direct contact can cause transmission. So things like feeding deer could potentially increase contact rates that could increase transmission. There are also concerns that the environment these animals might be attracted to then might become places where the disease builds up and animals might come along later and contact the disease.”

Visit the ISU Extension and Outreach website for additional information about chronic wasting disease in Iowa.