AMES, Iowa – Soil organic carbon plays a wide range of crucial roles in agriculture and in the evolving world of carbon credits and carbon markets.

This four-page guide defines soil organic carbon, explains how it is measured and the roles it plays in agriculture and the environment. 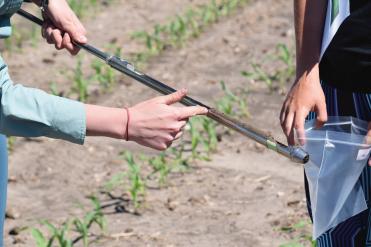 “Farmers have long been interested in the value of the organic matter in their soils, and this publication specifically looks at the amount of organic carbon in the soil and how it is measured,” said Jim Jordahl, project analyst with the Biorenewables Research Lab at Iowa State University.

“Third-party carbon programs are actively buying carbon credits from farmers who implement improved soil management practices, and in turn they sell those credits to companies interested in reducing greenhouse gas emissions,” according to Jordahl.

Roughly half of soil organic matter is organic carbon. Soil carbon is sampled by taking soil probe samples similar to those farmers already take to measure soil fertility, but to measure carbon for carbon credit programs, the probe is usually inserted a full foot, or about six inches deeper than for soil fertility tests. A bulk density test is also taken, to determine the amount (tonnage) of carbon found within a specific area and depth.

The samples are tested at laboratories equipped for carbon testing, and participating farmers are awarded credits based on farming practices that lead to additional carbon being sequestered.

The publication contains photos and graphics that show how testing is done and at what depth.

From year-to-year, the changes in soil carbon are often small and very difficult to measure, said Jordahl, but over time, they accumulate and can become substantial. In general, the more soil organic matter that a soil has, the darker its color. But soil organic carbon cannot be determined visually.