AMES, Iowa — An Iowa State University project to involve Des Moines youth in discussions of what their communities need has turned into an easy-to-use curriculum for communities anywhere to implement.

In 2014, faculty from across campus formed the Design Dialogues project, which sought to identify barriers and enablers to Black and Latinx youth’s academic success and college attainment. This grew from research that shows schools and learning play an important role in community well-being, but are often left out of neighborhood revitalization efforts. 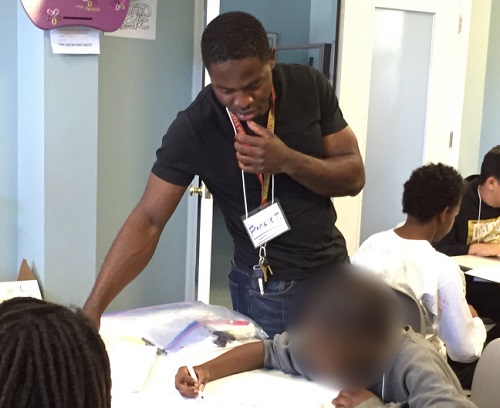 The project is led by Katherine Richardson Bruna, professor in the School of Education; Kimberly Greder, professor of human development and family studies and family life extension state specialist for ISU Extension and Outreach; and Jane Rongerude, associate professor of community and regional planning.

In collaboration with the ISU 4U Promise program, the team identified neighborhoods in Des Moines to lead workshops guiding young people through activities to think critically about their neighborhoods, to articulate shared visions for community change, and to identify pathways to realize those goals. The workshops in 2015 consisted of self-portraits, mental maps, think sheets, “placeness” maps and more.

In one exercise that asked youth to map their “learning places,” the most frequently mapped place was home.

“So often when we talk about marginalized communities, they become pathologized, but in fact they’re doing exactly what they’re supposed to do,” Rongerude said. “They’re feeling cared for and taught in those places. It’s one thing for us as experts to say this is how it is, but to see kids identify that for themselves is very powerful.”

Dialogue to drop in anywhere

Design Dialogues was not simply “an interesting after-school exercise,” Rongerude says. The curriculum that resulted is intended for community organizations anywhere that are actively looking to engage with their youth. It’s available for free through ISU Extension and Outreach.

Frankie Torbor, a 2016 community and regional planning graduate who served as a peer facilitator on this project, says the program was valuable not only to apply what he was learning in the classroom but to gain experience in research as an undergraduate student.

“This was my first taste of the community engagement part of the planning process,” he said. “It sounds cliché but young people are the future and it’s important to engage them at that stage because they’re benefiting from and experiencing what’s offered in their neighborhoods and towns for years to come.”

The more local, the better

With a rise in youth activism and community engagement this year, Greder points out that the Design Dialogues project is meant not to discount change that is already occurring but to complement existing efforts and provide a system of frameworks and processes.

“Some things are common across time, but the context of people’s lives changes,” Greder said. “There’s a lot of variance in context across the state of Iowa, and not even rural versus urban but within urban, contexts are different. The more local you can get data, the more you can fine-tune your practice.”

Following the workshops, youth put together reports and presentations and led community tours to show their intended audiences what they envision for their neighborhoods and communities, an important exercise to help youth “become familiar with the process of speaking to power,” Rongerude said.

However, Greder points out, “It’s up to those with the privilege of receiving this information to actually take that and do something with it.”

Photo caption: Frankie Torbor, a 2016 community and regional planning graduate, worked as a peer facilitator during the Design Dialogues workshops in Des Moines. Image has been altered to protect identity. Photo provided by Jane Rongerude.

Introduction to the Design Dialogues Curriculum: A Process for Thinking Critically with Youth about Community and Learning