AMES, Iowa – Joshua Michel, a former agricultural specialist at the Muscatine Island Research Farm, is joining 10 other field agronomists to deliver education and programming to support Iowa farmers. He will cover the southeast section of the state with his office based out of Louisa County. 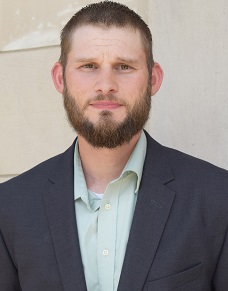 Michel served the research farm since January 2017. While at the farm he was responsible for coordinating corn and soybean field studies that included planting, harvesting, tillage and pest management. Michel also took part in several field days and classroom events to educate area farmers and industry representatives on current research and best practices.

Prior to working at the Muscatine Island Research Farm, Michel worked for DuPont Pioneer in Johnston, Iowa, for five years. There, he was responsible for overseeing irrigation and fertilizer operations for more than 60 greenhouses and 20 growth chambers. Michel also contributed to research on corn and soybean production. Michel received the Research Contribution Award for his leadership, problem solving and exceeding goals while employed by DuPont Pioneer.

Michel is a graduate of Upper Iowa University holding a degree in biology and conservation management and is currently working toward a Master’s degree in agronomy at Iowa State University.