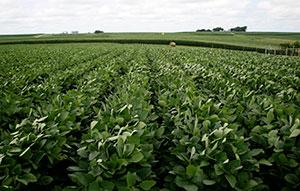 While dips in production costs are encouraging, the large drop is attributed more to math than it is to lower input prices.

“The study shows the driver behind these falling costs is the decline in both rent and machinery costs,” said Alejandro Plastina, assistant professor and extension economist with Iowa State University. “Both of those variables are affected by a one-time change in methodology.”

In May 2016, Ag Decision Maker published an article on farm machinery efficiency. The new information on increasingly efficient machinery was incorporated into the formula used to calculate input costs.

“Despite the projected increase in fuel prices, the total machinery costs ended up being lower than what we reported last year because of an improvement in the efficiency of those machines,” said Plastina. “There has also been a $30-35 gap between the cash rent projected for the estimated costs of production and the cash rents reported in our annual cash rent survey since January 2014. The 2017 production cost estimates now use cash rent totals that are expected to be within $8 of the reported averages in the 2017 cash rent survey.”

“A decline in the price of fertilizer and lime prices, machinery costs and land rents are expected to more than offset increases in herbicide costs,” said Plastina.

These lower costs of production, when combined with a well-executed marketing plan, will likely result in small but positive profit margins in certain rented acres of both corn and soybeans with cash rents similar to the ones used in the report, as well as owned land with reasonable fixed costs associated with ownership factors. Budgets are available for corn following soybeans, corn following corn, and soybeans following corn. They are also available for low-till, strip till, hay, oats and pasture acres.

“If current price projections are realized with the cost structure we are using, then there should be some positive margins this year,” Plastina said.

Input costs and yields vary between operations across the state. Decision Tool spreadsheets are available to aid in individual analysis of an operation’s own cost of production.

Further details about the report is available in the February issue of Ag Decision Maker. The full report, titled “Estimated Costs of Crop Production in Iowa – 2017” (FM 1712), can be accessed through the Extension Store.